A novel tyrosine kinase 2 (TYK2) inhibitor may provide efficacy comparable to that of currently available biologic agents for psoriasis, without the adverse effects associated with JAK inhibitors, a study shows. 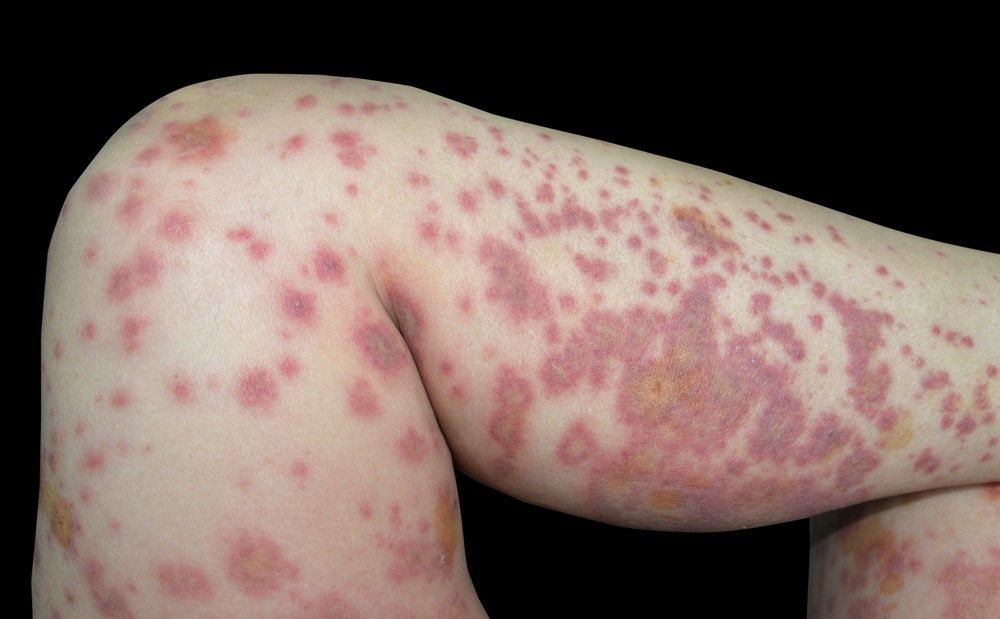 A novel tyrosine kinase 2 (TYK2) inhibitor may provide efficacy comparable to that of currently available biologic agents for psoriasis, without the adverse effects associated with JAK inhibitors, a study shows. (&copy;FreeBirdPhotos/Shutterstock.com)

A novel tyrosine kinase 2 (TYK2) inhibitor may provide efficacy comparable to that of currently available biologic agents for psoriasis, without the adverse effects associated with Janus kinase (JAK) inhibitors that target similar cytokines, according to a recent phase two study.

"The importance here is that TYK2 inhibition can be very effective in the treatment of diseases like psoriasis. Additionally, this is one of the few small molecules that has made it this far - with high efficacy and no off-target effects, issues have thwarted other small molecules," said lead author Kim A. Papp, M.D., of Probity Medical Research. The study appeared in the September 2018 New England Journal of Medicine.

Off-target effects with JAK inhibitors are often dose-related and occur only because the drugs are less specific than one might hope, he said. "And this product seems to have a good balance of high efficacy and, so far, good tolerability and safety, partly because of the pathway and partly because of the specificity."

According to the authors, "The absences of neutropenia, elevations in liver enzyme levels and the serum creatinine level, and dyslipidemia - adverse effects that have been observed in clinical trials of JAK inhibitors that target similar cytokines – are consistent with the different type of activity of the two classes of drugs."

TYK2 activates signal transducer and activator of transcription (STAT)-dependent gene expression and functional responses of interleukin (IL)-12 and IL-23, as well as type I and III interferon receptors. As such, TYK2 signaling has been implicated in the pathophysiology of psoriasis and other immune-mediated diseases.

Blocking IL-23, as guselkumab does, or IL-12 and IL-23, as ustekinumab does, has proven effective in psoriasis, as have conventional oral treatments such as acitretin, methotrexate and cyclosporine. BMS-986165 appears to offer the selectivity and safety of biologic drugs with the convenience of an oral tablet, said Dr. Papp.

Biologic drugs face pressures including the potential for immunogenicity. Additionally, a sizable subgroup of patients has an iatrogenically upregulated reticuloendothelial system, either from birth or development over time, Dr. Papp said. Part of this system's job is to regulate native proteins, such as gamma globulin.

"All of the biologics that we administer are foreign proteins." The human body accommodates them to an extent, he said, but people with an upregulated reticuloendothelial system will clear the drugs more readily, resulting in modest efficacy or waning results over time. Conversely, small-molecule drugs generally do not generate immunogenicity, and the pathways that clear them remain fairly stable over time.

Additional benefits of small-molecule drugs include the slight imprecision of their mechanism of action, said Dr. Papp. The laser-like focus of biologic drugs results in a somewhat more limited range of disorders which they can address, he explained. "The advantage of a small molecule, particularly something like a TYK2 inhibitor, is that it is exquisite in blocking its target, but also that TYK2 mediates other cytokines. So it's not just IL-23. We can look at the interferons, for example." Attacking interferons likely will not impact psoriasis, he said, but it one day might impact other conditions believed to be TYK2-mediated, such as alopecia areata, vitiligo and discoid lupus.

The drug's manufacturer may or may choose to not consider these possibilities, said Dr. Papp. "But there are other conditions that you'd want to at least keep in peripheral view. Psoriasis is first. But when you look at the possibilities, it broadens out substantially. This is a real key result, not only at this point, but also for the next 10 years."

Investigators randomized 268 patients to placebo or one of five active BMS-986165 doses: 3 mg every two days, daily or twice daily, 6 mg twice daily or 12 mg once daily. After 12 weeks, between 9 percent and 75 percent of actively treated patients achieved Psoriasis Area and Severity Index (PASI) 75, versus 7 percent of placebo-treated patients. The only comparison to placebo that did not reach statistical significance occurred with the lowest dose, 3 mg every other day (p=0.49). Physician global assessment scores showed a similar pattern. Additionally, 43-44 percent of patients at the three highest doses reached PASI 90.

Mild-to-moderate acne impacted up to nine percent of actively treated patients, versus zero in the placebo group. "The higher frequency of acne may be anomalous," Papp et al. wrote, "or it could be due to proliferation of commensal bacteria and resulting inflammation in the pilosebaceous units in the skin, as a consequence of the inhibition of cytokines involved in resistance to these organisms."

Study limitations include its short duration, small sample size and lack of active comparator. Although comparisons with other drugs have not been performed, authors added, response rates were similar to those reported for other biologic agents for psoriasis, including ustekinumab and adalimumab. Overall, authors concluded, the study's results warrant confirmation in a larger, longer trial.