Jonathan H. Zippin, M.D., Ph.D., explains what existing drugs and investigational compounds that inhibit the JAK-STAT pathway are being investigated as treatment for atopic dermatitis, alopecia areata, vitiligo and psoriasis.

“Clinical trials are already underway evaluating oral JAK-STAT inhibitors that are licensed for the treatment of non-dermatologic diseases. Investigational topical formulations of these drugs are also being studied, as are a number of novel oral and topical JAK-STAT inhibitors,” Dr. Zippin says. “The experience with this class of drugs in dermatology is early, but preliminary results are encouraging, particularly for the locally applied agents that would minimize risk for systemic adverse events.”

Knowledge of the basic science of the JAK-STAT pathway along with the immune mechanisms and molecular signaling pathways involved in the pathogenesis of various inflammatory skin diseases provides a foundation for understanding interest in JAK-STAT inhibition as a therapeutic target.

The JAK-STAT pathway is an intracellular signaling pathway that is downstream of cytokines that are critical in the pathogenesis of various inflammatory skin diseases. It also regulates the production of inflammatory cytokines, Dr. Zippin says. He shared his insights with colleagues during the ODAC Dermatology Aesthetic & Surgical Conference in January.

The JAK-STAT signaling cascade is initiated upon cytokine binding to its respective extracellular receptor. The binding leads to JAK phosphorylation that is followed by translocation of STAT proteins into the cell nucleus. In the nucleus, the STAT proteins regulate the expression of genes that are responsible for the synthesis of cytokines and other mediators that act on various cell types, including immune cells (T cells, B cells, natural killer cells, critical T cells) and skin cells.

Both the JAK and STAT families are comprised of multiple members, and the various cytokines that are involved in the pathogenesis of different inflammatory skin diseases activate different combinations of JAKs and STATs. JAK-STAT inhibitors are small molecule drugs that prevent JAK activation.

“Drugs designed to inhibit the JAK-STAT pathway act at a level below the biologic agents that are currently used to treat inflammatory skin diseases. The biologics are monoclonal antibodies that block the activity of the pro-inflammatory cytokines either by binding to the cytokine or its extracellular receptor,” Dr. Zippin explains.

Currently, the development of JAK-STAT inhibitors for use in dermatology is focusing on the treatment of atopic dermatitis, alopecia areata, vitiligo and psoriasis.

“We already have very good therapeutic options for atopic dermatitis and psoriasis, but JAK-STAT inhibition would offer another approach for the management of those diseases, and even offer a new topical treatment. On the other hand, there is great interest in developing JAK-STAT inhibitors for alopecia areata and vitiligo because of their unmet need for good ther-apies,” Dr. Zippin says.

Tofacitinib, which inhibits JAK1, 2 and 3, is being developed as a topical treatment for AD. Results of a randomized, double-blind, placebo-controlled phase 2a trial enrolling adults with mild-to-moderate AD showed that after four weeks, treatment with tofacitinib 2% was associated with an 82% reduction in mean EASI score compared with a 30% reduction with placebo. Additional trials with this topical formulation are now underway.

For alopecia areata, results have been published from studies evaluating oral tofacitinib (Xeljanz, Pfizer) and oral ruxolitinib (Jakafi, Incyte), which inhibits JAK1 and 2. Both of these agents are also being developed as topical products that are being investigated as treatment for alopecia areata in ongoing clinical trials.

In a study of oral tofacitinib as treatment for alopecia areata, almost two-thirds of the 66 enrolled patients experienced some hair regrowth and approximately one-third of patients achieved a >50% improvement in the disease severity score (SALT). Oral ruxolitinib showed promise in a case series involving 12 patients, of whom nine (75%) achieved an average of 92% hair regrowth after treatment for three to six months.

Multiple case reports and case series have also been published describing benefit using either oral tofacitinib or ruxolitinib to treat vitiligo. Clinical trials with these oral medications are underway as is a pilot study investigating rux-olitinib 1.5% cream.

JAK-STAT signaling has pleiotropic effects and is involved in multiple homeostatic processes. Therefore, broad inhibition of JAK-STAT signaling has the potential for unwanted conse-quences that include increased risks of infection and malignancies, mild increases in serum lipids, and the development of certain cytopenias. These issues may be mitigated through the design of drugs that are highly selective for JAKs and STATs that are involved in disease pathogenesis and with topical versus oral administration.

“Oral JAK-STAT inhibitors have been used for several years with a reasonable safety profile so far, but it remains to be seen if problems will arise with longer term use. Therefore, as development of this class of drugs for dermatologic use continues, it will be important to identify compounds with a large therapeutic index,” Dr. Zippin says.

Disclosure: Dr. Zippin is a consultant and advisor for Hoth Therapeutics, has stock options (spouse) in Regeneron, and has received grant funding from Pfizer. 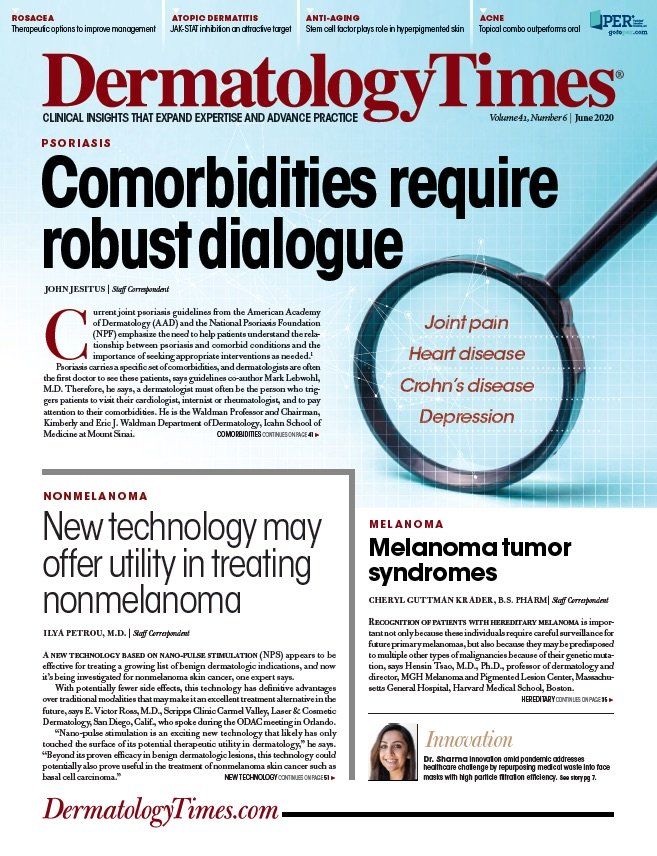