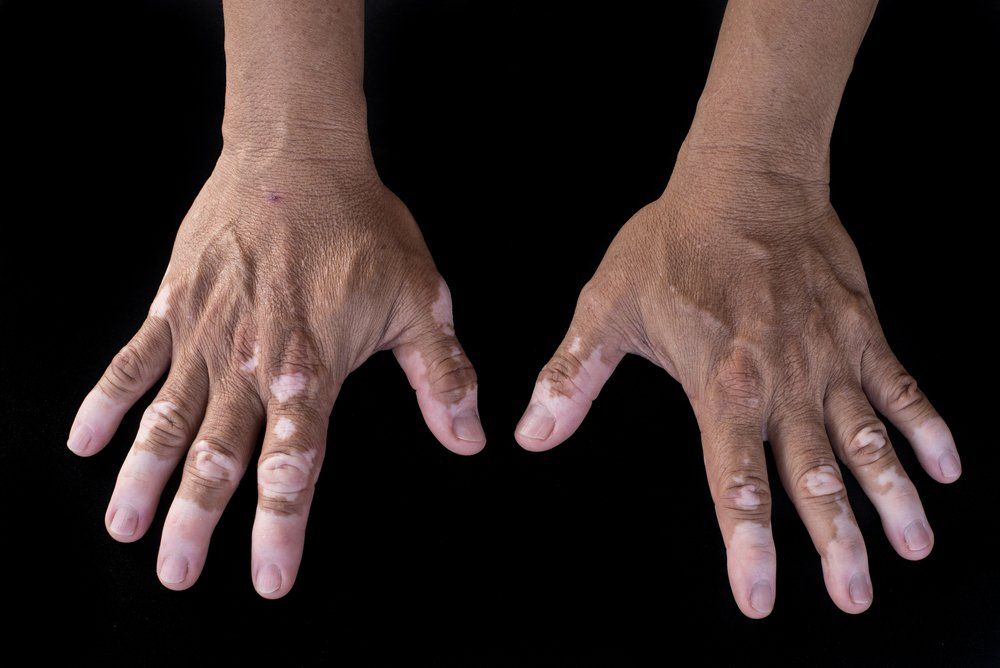 "JAK inhibitors are exciting. They're probably going to be the first FDA-approved treatment for vitiligo. We don't have any FDA-approved drugs right now that reverse disease," said John Harris, M.D., Ph.D. He is an associate professor of dermatology at the University of Massachusetts Medical School.

Although JAK inhibitors likely will be the first generation of FDA-approved drugs for vitiligo, he added, researchers are hoping that over time, they will be able to refine this approach to produce even more targeted treatments that are safe and beneficial.

Over the past 10 to 15 years, said Dr. Harris, vitiligo has undergone a surge in research that has outlined the central pathways that drive the disease. "One of those pathways is the interferon gamma (IFN-Æ´) signaling pathway. It seems to be very important for the progression of vitiligo." IFN-Æ´ signals through the IFN-Æ´ receptor and JAK1 and JAK2, then through STAT1. The discovery that IFN-Æ´ drives vitiligo in part came from a mouse model developed by Dr. Harris and colleagues. "We found that the spots appearing in the skin of mice and in people expressed the same IFN-Æ´ gene signature."2

More specifically, he said, the researchers used IFN-Æ´ knockout mice and IFN-Æ´ receptor knockout mice. "And we were able to target IFN-Æ´ with an antibody. All these approaches have shown us that the mouse disease is prevented and reversed by blocking the pathway. This finding laid out the rationale for testing drugs that target IFN-Æ´ signaling."

Additional research with the mouse model showed that when IFN-Æ´ is produced in the skin, it activates the chemokines CXCL9 and CXCL10 within the epidermis. These proteins use a positive feedback loop (through the signaling of the CXCL10 receptor, CXCR3) to recruit T cells to the skin. "Essentially, T cells go to the skin, and make IFN-Æ´ when they see their target melanocytes. The keratinocytes sense IFN-Æ´ and make CXCL9 and CXCL10, and that recruits more T cells. We believe that's what's being inhibited by the JAK inhibitors."

He likens the positive feedback loop to the way ants would find a drop of melted ice cream on a sidewalk. "An ant eventually will stumble across one of those drops and very quickly will lay a trail back to the nest. Soon you'll have 1,000 ants on that spot, devouring it. That's what's happening here - the first T cell is the scout ant, but then it lays a trail for all the other ones to follow. That's where disease occurs." Blocking IFN-Æ´ signaling and CXCL10 production inhibits the entire cycle, preventing or possibly even reversing disease, he said.

Because Dr. Harris and colleagues were able to show the key role played by keratinocytes in responding to IFN-Æ´, they hypothesized that topical JAK inhibitors could also be effective because topical agents can target keratinocytes. An 11-patient study showed that topical ruxolitinib was effective for vitiligo.5

Taken together, said Dr. Harris, the above findings all provide rationale for three ongoing clinical trials of JAK inhibitors in vitiligo. Aclaris and Incyte Pharmaceuticals are testing topical ATI-502 and INCB018424, respectively, in phase 2. Pfizer is testing two oral JAK inhibitors, he said. "The Incyte study is the furthest along. It's a two-year study with a six-month primary endpoint. There should be interim data soon." The entire study is scheduled for completion in July 2020.

Other researchers led by Dr. King have also observed that patients whose vitiligo improved with tofacitinib did so on areas of exposed skin.6 "So he hypothesized that this was due to exposure to light. Whether it's sunlight or visible light, it's hard to know. But exposed skin seems to do better with JAK inhibitors, suggesting that light was also beneficial in promoting the reversal of disease."

As part of the same analysis, Drs. Harris and King sampled the skin of a tofacitinib-treated patient. "We found that treatment with a JAK inhibitor actually removed the autoimmune cells from all of her skin, including the (light-exposed) skin that got better and the skin that did not. That suggested to us that the JAK inhibitor is sufficient to remove autoimmunity, the autoimmune cells driving the disease. The possible reason why light is helpful is because it stimulates the melanocytes to regrow."