Dermatologists must be able to distinguish between infected and noninfected diabetic foot ulcers because whether or not a DFU is infected can help determine treatment protocol, says Warrent S. Joseph, D.P.M, FIDSA. 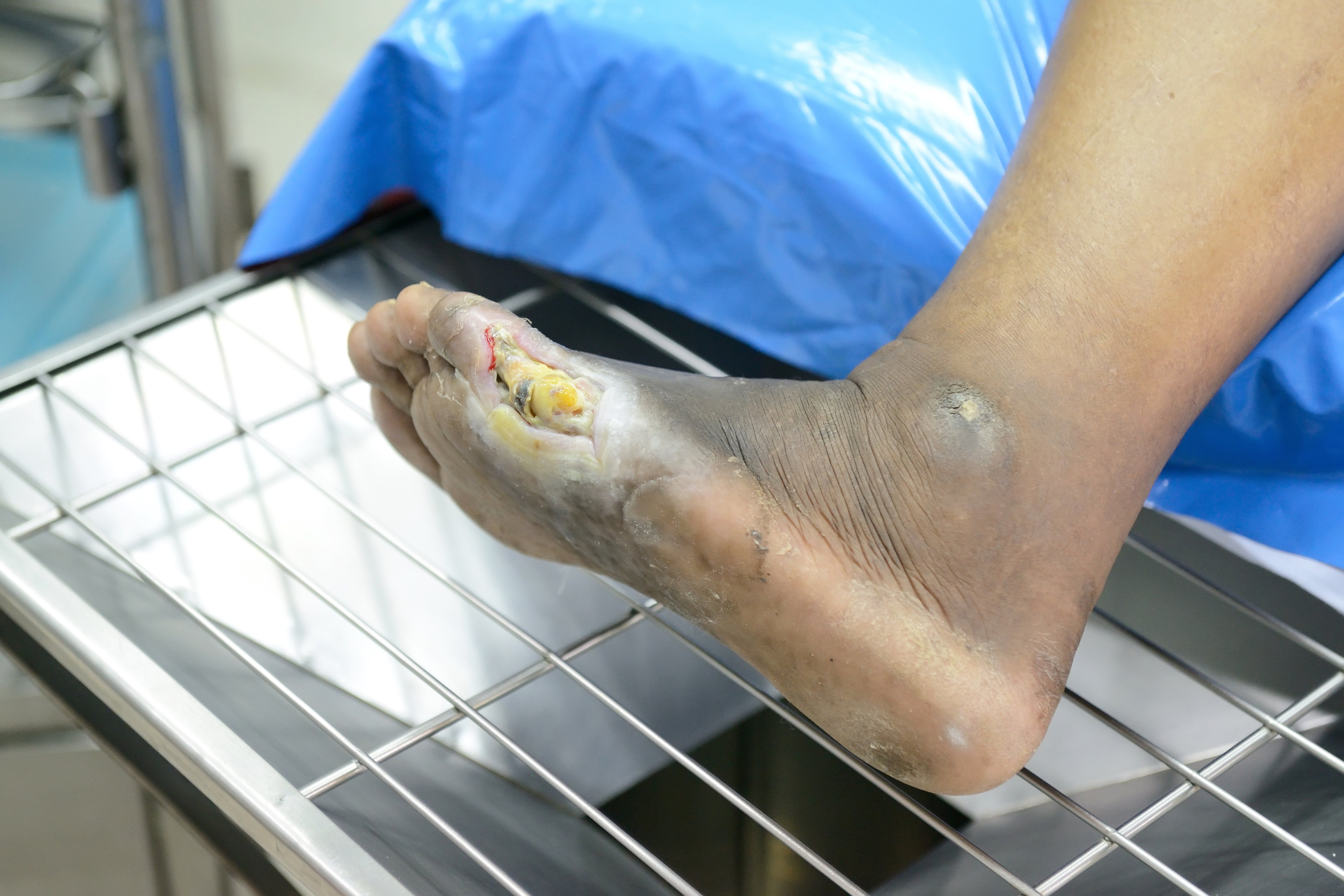 Dermatologists must be able to distinguish between noninfected DFUs and those that are mildly or moderately infected because it drives treatment decisions. (saritphoto - stock.adobe.com)

While dermatologists are unlikely to treat patients with severe foot infections that require hospitalization, they must be able to diagnose and manage mild-to-moderate infections in diabetic foot ulcers (DFUs), and follow current Infectious Diseases Society of America (IDSA) guidelines regarding antibiotic use, according to Warren S. Joseph, D.P.M., FIDSA, who presented at DERMfoot 2018. He is a consultant, lower extremity infectious diseases, Roxborough Memorial Hospital, Philadelphia, and a co-author of the IDSA guidelines, which appeared in Clinical Infectious Diseases in June 2012.

Dermatologists must be able to distinguish between noninfected DFUs and those that are mildly or moderately infected, he said. The IDSA requirement to classify DFUs as infected or noninfected is a key take-home message because it drives treatment decisions.

“We differentiate the infected from the noninfected by looking for the clinical signs and symptoms of infection such as erythema, heat, swelling and induration,” Dr. Joseph said. Patients must possess at least two of these criteria, which also include local tenderness or pain and prurulence. Mild infections affect only the skin and subcutaneous tissues, while moderate infections include deeper tissues or erythema greater than 2cm, but no signs of systemic inflammation.

“All mild and most moderate DFUs can be treated on an outpatient basis,” he said. A publication he co-authored applies the IDSA classification scheme to all skin and soft tissue infections (SSTIs). Published in Open Forum Infectious Diseases in January 2017, this article suggests hospitalization and consideration of cultures and surgery for more severe types of moderate SSTIs.

“For years, people would say, ‘These patients don’t respond to infection, and therefore they may not demonstrate the classic signs of inflammation. What about subclinical infection that keeps wounds from healing?’ But I don’t believe there’s particularly good evidence behind this concern.”

IDSA guidelines also advise against culturing noninfected wounds or treating them with antibiotics.

“If you take a culture of a clinically noninfected wound, you’re going to grow all sorts of bacteria. And none of them are necessarily causing infection.”

According to IDSA guidelines, many of diabetic foot infections can be treated in the outpatient setting. Guideline authors write, “Clinicians can probably use highly bioavailable oral antibiotics alone in most mild, and in many moderate, infections and topical therapy for selected mild superficial infections (strong recommendation, based on moderate evidence).”

With modern antibiotics that are more clinically bioavailable, or bioequivalent to IV antibiotics, “It doesn’t matter whether they’re given IV or PO. You’ve really got the same tissue levels,” said Dr. Joseph. “So there’s no reason to hospitalize patients unless they are septic or medically unstable. That’s not the patient that the average dermatologist deals with.”

Currently, only three antibiotics have FDA approval for diabetic foot infection. Ertapenem, piperacillin/tazobactam and linezolid (the only oral option) had been approved for these indications, he said, until the FDA removed DFUs from its acute bacterial skin and skin structure infection (ABSSSI) clinical-trial guidelines in 2013. Nevertheless, said Dr. Joseph, dermatologists can use any antibiotics off-label if they will be effective against the bacteria present.

A pooled retrospective analysis of two phase three trials involving ABSSSIs showed no difference in efficacy in the use of linezolid and tedizolid whether the infection was in the lower extremity versus other parts of the body, said Dr. Joseph, lead author of the analysis. This publication appeared in the July 2017 edition of the Journal of the American Podiatric Association.

Regarding duration of therapy, “we must move beyond the concept of giving an automatic number of days of antibiotic therapy. You can’t assume that 10 days, or two weeks, is the right number. What happens if the infection looks better in four days? Then you’re giving 10 more days of antibiotics which the patient probably doesn’t need.”

Instead, he suggested basing duration of therapy on clinical response.

“Not long ago, the concept of ‘better plus two’ was floated. I believe it’s very valid - treat patients until they are clinically better, plus two more days before discontinuing the antibiotic. The big thrust nowadays in the pharmacy and infectious disease worlds is antimicrobial stewardship - using the narrowest-spectrum antibiotics for the shortest period of time to avoid developing antimicrobial resistance.”

“IDSA guidelines differentiate prurulent from non-prurulent cellulitis. In other words, if the patient has pus, one must consider MRSA until proven otherwise. We know MRSA produces more pus than methicillin-susceptible Staph aureus does.” For mild to moderate infections in patients who have not recently received antibiotic treatment, IDSA guidelines suggest that therapy targeting only aerobic gram-positive cocci may suffice.

Many physicians are concerned about Pseudomonas, he said. “But Pseudomonas is very rarely a pathogen in DFUs. It is found less than 10 percent of the time because it’s a colonizer - you just find it on wounds. That’s the same even with venous stasis ulcers.” But as with predetermined durations of antibiotic therapy, “We’ve got to get away from assuming that Pseudomonas is actually a pathogen in these wounds - at least in the United States, Canada and Western Europe.” Pseudomonas is much more prevalent in hot, humid climates such as those of the Southern Hemisphere, the Indian Subcontinent and the Far East. Â

DISCLOSURES:
Dr. Joseph is a speaker for Merck, maker of tedizolid.