A literature review by an international group of physicians shows that the physiological skin parameters differ among men and women suggesting that treatment choices should differ as well. 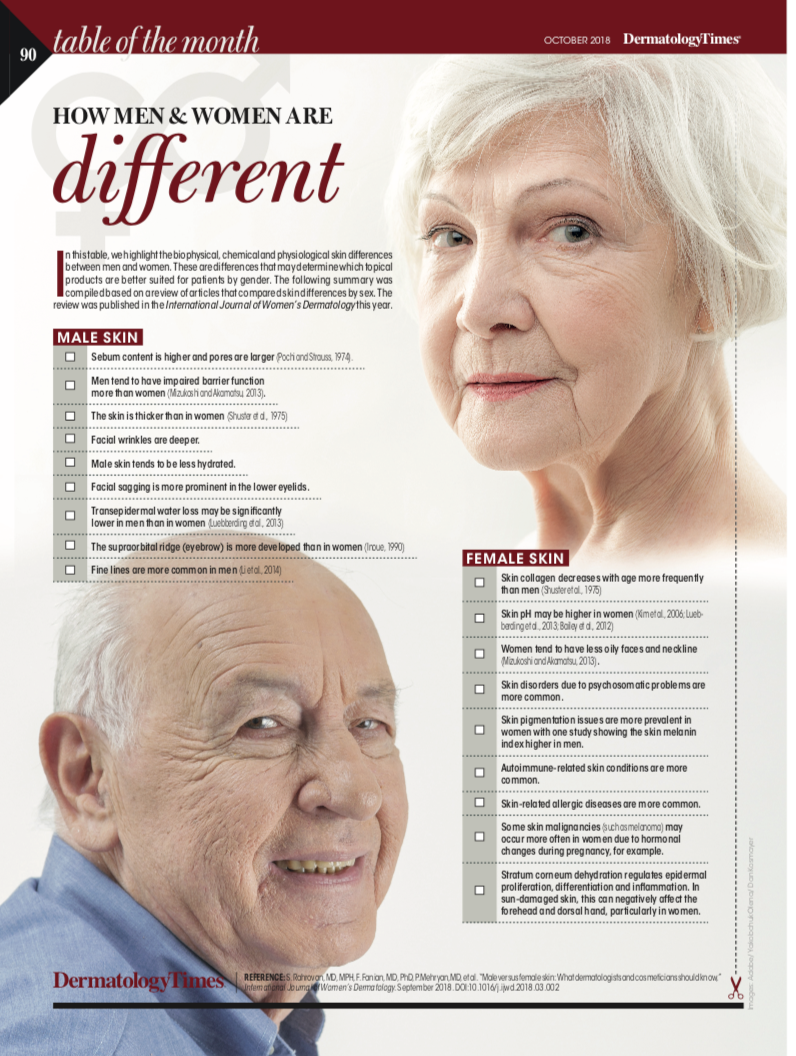 Should men and women be treated with the same facial products in the same way? A literature review by an international group of physicians shows that the physiological skin parameters of hydration, transepidermal water loss, sebum, microcirculation, pigmentation and thickness differ among men and women suggesting that treatment choices should differ as well.

“Understanding the physiological, chemical, and biophysical characteristics of the skin helps us develop a proper approach for the management of skin diseases,” wrote the authors of a review that focuses on sex differences of skin. The review appears in the September issue of the International Journal of Women's Dermatology.

The review, which included 57 studies, was led by Alireza Firooz, M.D. of the Center for Research and Training in Skin Disease and Leprosy at Tehran University of Medical Sciences in Iran.

“The studies show that the skin parameters of hydration, transepidermal water loss, sebum, microcirculation, pigmentation, and thickness are generally higher in men but skin pH is higher in women,” she and her colleagues wrote.

Developing a deeper understanding of the skin in this way could be used in developing facial products and cosmetic treatments that are truly sex-specific.

“The knowledge of sex-linked cutaneous differences might help in study planning and the development of female- versus male-specific products for more appropriate dermatological treatments or cosmetic interventions,” the authors wrote.

There are established sex differences in anatomy, physiology, epidemiology and in many diseases. “With regard to skin disorders, infectious diseases are presented more in men, but psychosomatic problems, pigmentary disorders, certain hair diseases, and autoimmune and allergic diseases are more common in women,” the authors wrote. In men, “skin pigmentation and thickness are significantly higher, facial wrinkles are deeper, and facial sagging is more prominent in the lower eyelids, but there is no significant difference in skin elasticity between the sexes.”

The molecular mechanism that drives these differences remain to be defined, but knowing they exist and treating patients accordingly may improve treatment outcomes.  In this article, we summarize key takeaways from the review.

HYDRATION
A healthy skin barrier protects against UV damage and other assaults, plus, it holds in moisture. Without adequate hydration the skin’s physical and mechanical properties are impaired.

The review cites a 2013 German study by Luebberding et al. that shows young men tend to have "high levels of stratum corneum hydration," but as the men aged beyond 40 years, the hydration decreased. Hydration on the forehead in both men and women beyond 70 years significantly fell below that of younger men.

TRANSEPIDERMAL WATER LOSS
While some studies reported comparable water barrier functions in both sexes, the 2013 study by  Luebberding et al. showed that in men younger than 50 years old, transepidermal water loss was significantly lower in men, but on the forehead, cheeks and neck, it was higher than that of women.

SEBUM PRODUCTION
Up until a 2012 study by Bailey et al., it was believed that sebum production between men and women was equal, but Bailey et al. described higher sebum levels in men on the face, except forehead. However, Luebberding et al. reported sebum content increased slightly on the forehead with age, but progressively decreased in women. In 2006, Roh et al. described a correlation between excessive sebum production and larger pores.

SKIN THICKNESS
In 1975, Shuster et al. first documented the loss of skin collagen (which is associated with skin thinning) with age, particularly in women after 50 years. In men, however, it decreases equally over time.

But the most recent study on skin thickness Dr. Firooz and colleagues cited was in 2008 in which Mogensen et al. confirmed the results of a 2006 study by Gambichler et al. who found no differences in epidermal thickness among men and women. Their study was based on optical coherence tomography imaging.

SKIN pH
Men tend to have lower acidic levels according to a 2012 study by Bailey et al.  which differs from a 1987 finding Zlotogorski and a 1991 study by Wilhelm et al. that showed no sex differences.

SKIN ELASTICITY
A 2012 study by Firooz et al. reported that females had slightly higher skin elasticity than men, but the findings were not statistically significant, which is in agreement with a 2012 report by Bailey et al. who found that women had higher skin elasticity, but only in the abdominal region. The 2014 Luebberding et al. study found that: “The mechanical properties changed differently in men and woman over their lifetime and that female skin is less distensible but has a higher ability to recover after stretching in comparison with male skin.”

WRINKLES
In 2013, Tsukahara et al. reported that among men and women between 65-75 years, women disproportionately had more wrinkles than men.