Many of those differences between men and women come into play in how men behave and are treated in dermatologists’ offices.

Many of those differences between men and women come into play in how men behave and are treated in dermatologists’ offices. 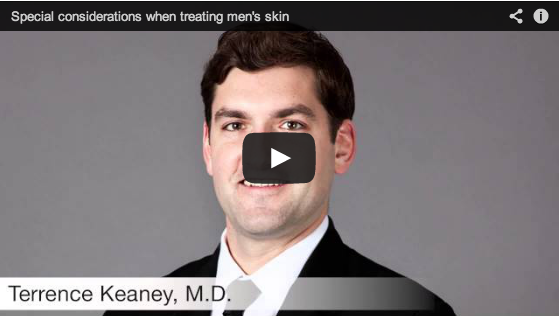 Two experts have weighed in on the nuances dermatologists must consider when caring for male patients. Tina S. Alster, M.D., is director of the Washington Institute of Dermatologic Laser Surgery and clinical professor of dermatology, Georgetown University Medical Center, Washington. She is directing a focus session called “Mennaisance” on male aesthetic issues at the American Society of Dermatologic Surgery annual meeting in October 2014. Her partner in practice, Terrance Keaney, M.D., also a dermatologist, directs the practice’s men’s center and will be on the “Mennaisance” panel.

Dermatology Times: What are key gender-related differences between men and women dermatology patients?

Dr. Alster: There is a relative lack of male-specific studies in aesthetics. What we find, however, is that you can’t approach men and women in the same way, in terms of offering them the same range of services.

Men, unlike women, are not as concerned about aging. They are concerned, but not as much as they are about other things, whether it’s rosacea, or body contouring or hair restoration and removal. They tend to come in with a specific problem, and, of course, aging is one of those, but it’s not the driving force behind many men coming in for treatment.

Dr. Keaney: Men are very different, both biologically and behaviorally.

If you look at the biological differences between male and female (patients), men have thicker (more vascularized) skin…. They tend to develop hair in different areas of the body. In addition, there’s less subcutaneous fat.

In addition, men tend not to be the best patients in dermatology … in that they tend to be more passive. They’re less likely to ask questions. They’re less likely to point out things that might concern them. So, in any approach to the male patient, you have to be a little more attentive, ask more questions and often explain in a little more detail (because men won’t necessarily tell you if they don’t understand).

DT: Let’s focus on two areas: Medical dermatology and cosmetic dermatology. Starting with medical dermatology, are there any specific concerns that are more prevalent among men and differences in treatment for these concerns?

Dr. Alster: I had touched on one earlier, and that is rosacea. A lot of men might not know they have that condition, but they come in complaining of a red nose, which ends up being more prevalent with certain activities or ingestion of certain foods or alcohol.

(Laser therapy) ends up being a better type of treatment for men because they can see a good (result) after just a single treatment. Typically, you need at least a couple (treatments), but it’s better and easier for them than applying topical agents or taking an oral medication.

Dr. Keaney: Males have higher rates of skin cancer than females - basal cell carcinoma, squamous cell carcinoma. But a big one that we should draw attention to is men have twice as a high mortality rate with melanoma. Whether that’s biology or behavior, we don’t really know.

We do know that men present with larger, thicker melanomas. They are less likely to notice changes in their moles. So, in terms of general skin checks for the male patient, there is a lot more education and you have to be more careful because men are not necessarily going to come in complaining of a changing mole. You really have to do a good job examining them, as well as using some of the new available tools on the market. For example, here we have the Melafind device (Mela Sciences), and we’re being proactive about using that in our male patients, given the higher rates of mortality among men.

DT: What about the male patient on the cosmetic side?

Dr. Alster: There are a lot of men who come in complaining either about having too much or too little hair. In addition, men have a higher incidence of folliculitis … so using lasers for hair removal can reduce the severity and duration of the folliculitis.

Another thing that they come in asking about is body contouring. Basically, shaping their torso - more than likely reducing fat around the girth.

Dr. Keaney: Even (with) the regular aging tools that we use, such as botulinum toxin and fillers, you approach the male patient much differently. (Males have different boney and muscular structures, as well as different aging goals.) For example, rather than augmenting the lips, which is commonly done in women, in the male face, often we’ll apply filler along the jawline or above the brow. These are masculine features of the face that are often not considered (for treatment). Female and male patients should be treated very differently, to highlight the masculine and feminine features.

One of the (conditions we treat) that is a little more male-specific is sweating - particularly, underarm sweating. At our practice, we use both botulinum toxin and a newer device called Miradry (Miramar Labs). Male patients are less likely to come back frequently, and MiraDry (results) in a permanent reduction in sweating, which occurs over two, three visits. Men like that kind of finality, in terms of treatment.

DT: What is MiraDry?

Dr. Alster: (It’s a microwave technology,) delivered in an outpatient setting. It typically takes under an hour for a treatment. One treatment has been shown to reduce sweating permanently by a good 55 percent and, after two sessions, upwards of 80 to 90 percent reduction. After two treatments, they are relatively dry and they don’t have to keep coming in for repetitive treatments, as would be required by using either Botox (onabotulinumtoxinA, Allergan) or Dysport (abobotulinumoxinA, Medicis) injections.

DT: Do men comply as well as women with at-home treatment?

Dr. Alster: (No.) We do spend time with men … reviewing how they take care of their skin. We try to let them know that we’re not going to make them a slave to skincare, but basically set up an easy regimen, which typically involves cleansing the skin; putting on an antioxidant (for those people who are aging baby boomers); and then a sunscreen. (It’s) basically doing a three-step approach every morning.

If they have more specific skin conditions, whether that’s acne or dyspigmentation or blotchiness, we may tell them to use something else on their skin. But, by and large, we find that most men (are more likely to do a once-a-day approach, versus doing multiple things a few times a day).

DT: When you treat men with laser or Fraxel (Solta Medical) treatments for wrinkles or scarring, are there any nuances in your approach to men’s skin?

Dr. Alster: Men’s skin is definitely thicker. Oftentimes, while we may use the same energy, we may apply additional passes of the Fraxel laser in particular areas, such as the cheeks or the jawline.

DT: Is there anything else important for dermatologists to know?

Dr. Keaney: Personal care product surveys show that men generally use less product on their skin than women. They’re not used to putting things on their skin. When I recommend any skincare or topical prescription medication, I try to tie it to a behavior that they do every day, such as shaving. So, I say, ‘Take your personal care product and put it next to your shaving cream.’ Then, I tell them to use the topical product after they shave. I find that compliance increases dramatically.