The American Academy of Dermatology’s newest guideline focuses on awareness of other health conditions associated with atopic dermatitis in adult patients.

The American Academy of Dermatology (AAD) has released new guidelines on atopic dermatitis (AD) and its comorbidities.1 The AAD dives into the evidence supporting these comorbidities—which include subjects like bone health and cardiovascular diseases—as the first part of a 4-part series and has discovered possible stronger evidence to support some associations. A multidisciplinary work group was created to evaluate evidence and determine the association between AD and these other conditions.

In its systematic review, the work group used the Grading of Recommendations, Assessment, Development, and Evaluation (GRADE) to weigh the certainty of evidence for AD and a range of comorbid conditions.2-5 Based on the strength and quality of evidence, the work group released statements on the various associations.

The meta-analysis found that 24.8% of adult patients with AD have asthma (95% CI, 223, 22.2%-27.5%) but with substantial heterogeneity across studies. Also, those with AD are 3 times as likely to have asthma compared with the general population. There appears to be a stronger association between severe AD and asthma than mild or moderate cases.

The work group determined that the concept of atopic march as an explanation for these associations is unproven. However, an immune response at other epithelial surfaces like the gastrointestinal tract (food allergy), upper respiratory tract (allergic rhinitis), and lower respiratory tract (asthma) was unproven.7 Longitudinal studies have shown that patients with multiple atopic morbidities usually do not have AD before developing other atopic conditions, which may suggest that other factors need to be investigated beyond barrier disruption.8,9

Turning to pediatric cases, the work group found that evidence showed that patients with asthma between ages 7 and 13 were also associated with a more persistent AD phenotype.10 The work group suggested that this knowledge may help when counseling pediatric patients about managing AD into their adulthood. Also, targeted therapies, like dupilumab (Dupixent; Sanofi and Regeneron), were found to improve outcomes of both severe AD and asthma.11,12

Findings regarding atopic dermatitis (AD) in adults included the following:

Next, the work group looked at food allergies, which already had a highly suggested association with AD, and got a better picture of the relationship. They found “clear evidence” of a link in adult patients, but the prevalence of food allergies among the AD patient population (11%; 95% CI, 6%-16%) is limited by heterogeneity across studies.1 The heterogeneity was related to the definition of the food allergy, the type of food, and the use of self-report, physician diagnosis, or administrative codes.

Addressing allergic rhinitis, conjunctivitis, and eosinophilic esophagitis, the work group acknowledged that although AD is not studied as much as asthma regarding its association with allergic rhinitis, it is still recognized as a common comorbidity of AD and is a component of some diagnostic criteria for AD.13,14

“In studies comparing the prevalence or incidence of allergic rhinitis between AD and the general population or general clinic population controls, AD was consistently associated with allergic rhinitis, but the magnitude of the association varied widely across different study designs and populations,” the work group wrote.

Little evidence supports the associations between AD and allergic conjunctivitis and eosinophilic esophagitis, according to the work group.

Investigators of many epidemiologic studies identified an association between AD and alopecia areata (AA).15 Findings from a Danish study showed that the adjusted odds ratio (OR) for the association between AD and AA was 26.31 (95% CI, 14.48-47.70).16 Some of the strength may be because of diagnostic bias, but the work group still found it to be valid. They also addressed the contention that AD is related to a worse prognosis of AA severity and response to treatment, but related studies are limited. Results of an AA registry study did show that AD is associated with a higher likelihood of having alopecia totalis or universalis, but the finding was not statistically significant (OR, 1.24; 95% CI, 0.95-1.61).17

There are no targeted systemic treatments approved for AA. Dupilumab may be a potentialoption but was also reported to cause new-onset alopecia areata.18 Additionally, Janus kinase inhibitors show promise for both AD and AA but are not yet approved in the United States for either indication.19

Urticaria was also reviewed. In a study on autoimmune conditions, investigators from Denmark demonstrated a strong association between chronic urticaria and AD (OR, 9.92; 95% CI, 6.43-15.32).16 Findings from another study showed that patients with chronic urticaria were more likely to receive a diagnosis of AD (HR, 3.1; 95% CI, 2.0-4.8).20

In a clinical setting, itch is a common complaint among patients with either condition, and scratching can worsen the dermatitis. In study findings, omalizumab (Xolair; Genentech), an anti-IgE monoclonal antibody, has been shown to treat chronic idiopathic urticaria effectively in adults. However, it had mixed results when studied in randomized controlled trials in pediatric AD.21,22

There may be a slight association between AD and hypertension, peripheral and coronary artery disease, congestive heart failure, and acute events such as myocardial infarction and cardiovascular death. The work group stated that, in general, these associations as strong as those for AD and psoriasis, so they added qualifying remarks to those statements. In the meta-analysis of the occurrence of hypertension in adults with AD compared with controls, the OR was 1.06 (95% CI, 1.00-1.13).1 When pooling cohort studies for the association between AD and congestive heart failure, the HR was 1.25 (95% CI, 1.03-1.53).1

In an epidemiologic cohort study from the UK, AD severity gradients were seen for:26

It should be noted treatment is frequently used as a proxy to define AD severity in epidemiologic studies, like the one above.

The work group wrote that the clinical implications of these associations are unclear, and current trials in AD did not demonstrate an increased risk of venous thromboembolism.27-33

Current evidence suggests a small association between adult AD and obesity and dyslipidemia. Data from 8 cross-sectional studies that the work group pooled showed that AD was or is associated with 36% increased odds of obesity (OR, 1.36; 95% CI, 1.01-1.83) and 13% increased odds of hypercholesterolemia (OR, 1.13; 95% CI, 1.09-1.18) compared with the general population.1 As this point, it is unclear if the AD severity affects the association of obesity.34,35 The association may vary geography.36

Although investigators have offered various potential explanations for the association between AD, osteoporosis, and fractures, further research is needed to determine the true mechanism, according to the work group. Some explanations suggest that chronic systemic inflammation leads to aberrant bone metabolism and increased bone loss.41-43 Also, on average, patients with AD are more likely to be deficient in vitamin D, and sleep disruptions caused by AD may lead to increased risk of injury in general.44,45 Oral corticosteroids can heighten the risk of fractures, possibly affecting patients with AD who are being treated with those agents.46-48 The evidence of topical corticosteroid use and its relation to risk of fractures is being studied but remains unclear.49

The association between AD and staphylococcal skin infection is well established.50 Herpes superinfection (herpes simplex virus [HSV] or eczema herpeticum) is a more severe complication of AD,51 and results of a UK cohort study showed HSV infections to be more than twice as common among people with AD compared with the general population, the work group explained.52

AD is also associated with serious cutaneous infections (defined as those that lead to hospitalization, are life-threatening, or require treatment in an inpatient setting), according to data from hospitals across the United States (OR, 4.62; 95% CI, 4.51-4.74).1 It was also found that bacterial skin infections and HSV are more likely to occur with poorly controlled dermatitis; successful treatment may reduce the incidence of these infections.53

The work group found that adult patients with AD were more likely to have suicidal thoughts than adults without AD (OR, 1.71; 95% CI, 1.43-2.03). However, there is less evidence on an association with death from suicide, and study results were conflicting. 54-57

Although the reasons for the association between AD, depression, and anxiety remain undetermined, a possible explanation is the psychological burden of itch, poor sleep, and decreased quality of life caused by the skin condition. This is supported by data from clinical trials that found that an improvement in AD reduced symptoms of depression and anxiety in patients with moderate to severe AD.58,59

The work group commented that most studies on the link between alcohol use and smoking are cross-sectional, making causality difficult to determine. “As with depression and anxiety, an association [with alcohol and cigarette smoking] could be explained by the burden of AD increasing patients’ likelihood of engaging in those harmful behaviors,” the work group stated. Results of a cohort study on US nurses found no association between cigarette smoking and developing AD.62

Currently, more research is available on associations between AD and attention-deficit/hyperactivity disorder (ADHD) and autism spectrum disorders in the pediatric vs adult patient population. The associations for pediatric patients with AD and these comorbidities will be covered in a future practice guideline.

Just 2 studies were available on possible links, and only 1—a US population-based trial—examined the association of ADHD in adults and included controls from the general population.63,64 Those results did reveal an association (OR, 1.61; 95% CI, 1.25-2.06). The single study that compared the prevalence of autism spectrum disorders among adults with AD to adults with non-AD dermatologic conditions showed a positive association; however, CIs were very wide, preventing definitive conclusions.64 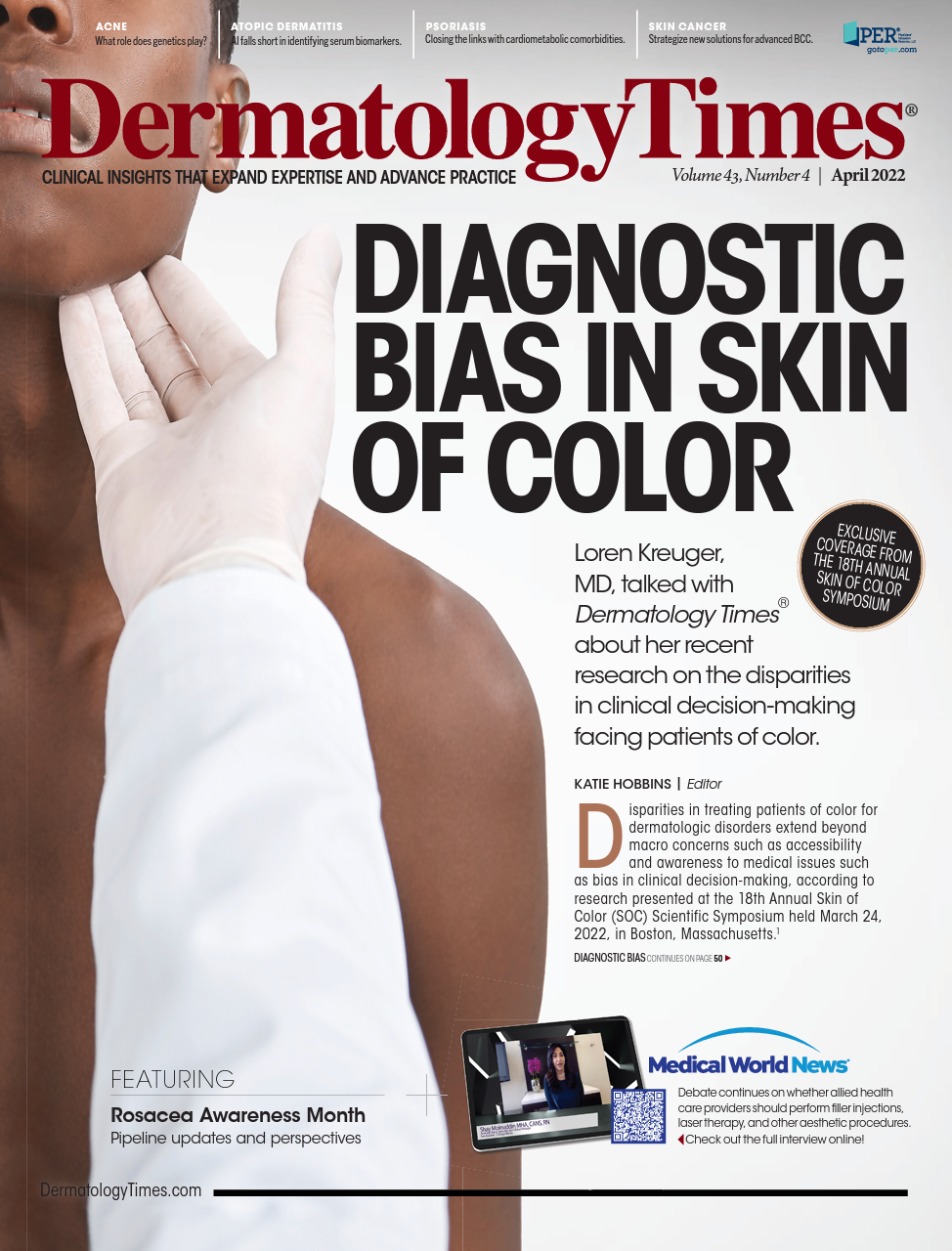