Uncover the ways in which psychological problems may be impacting the skin, or vice versa. Learn more. 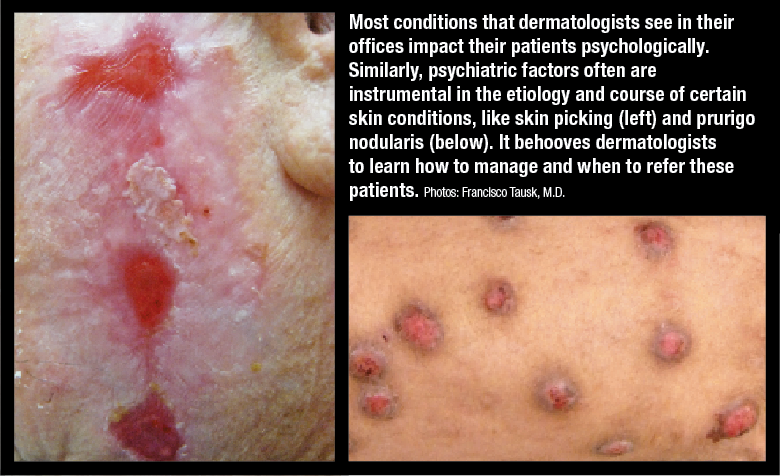 Ignoring the elephant in the room - the psychological aspects of skin disease - can prevent traditional treatments from working optimally or at all, according to  Caroline S. Koblenzer, M.D., a trained psychoanalyst and retired clinical professor of dermatology, University of Pennsylvania.

Dr. Koblenzer says it became clear to her soon after she started dermatology practice in 1966 that dermatology wasn’t answering the needs of many patients with skin conditions.

Those questions, according to the dermatologist, attempt to uncover the ways in which psychological problems may be impacting the skin, or vice versa.

Most conditions that dermatologists see in their offices impact their patients psychologically. In fact, some skin manifestations are almost entirely psychiatric, such as delusions of parasitosis, according to Richard D. Granstein, M.D., chairman of dermatology at Weill Cornell Medical College and president of the Association of Psychoneurocutaneous Medicine of North America (APMNA), which is the only organization in the United States that focuses on psychodermatology issues.

"One could argue that there are skin conditions that have little impact on psychology. Warts on the hands may not affect psychological status unless very large, but warts on the genitals probably do. Also, because many skin diseases are visible, even if not contagious or life-threatening, they have a special ability to interfere with interpersonal relationships,” Dr. Granstein says.

Another example of the mind-skin association is trichotillomania. This is a condition in which patients will pull out their hair, either with or without their conscious awareness. If patients could stop pulling their hair out, they certainly would, Dr. Koblenzer says.

"Patients feel ashamed and humiliated by their inability to control the action, and embarrassed by the appearance. It became clear to me that there was more to this than met the eye,” she says.

“The skin problems that we see are a psychological defense against the patients recognizing that there are emotional problems. I’m not suggesting that this is so in every patient, by any means, but certainly so in those patients who do not respond to treatment as one would anticipate."

NEXT: Eczema and emotions

Dr. Koblenzer coauthored a study on the topic of eczema and emotions in 1988, in the Archives of Dermatology.  She found that there was a lack of therapeutic response in a proportion of children with intractable eczema. The authors demonstrated that this ongoing lack of response could be attributed to dysfunctional parent-child relationships, which affected the physical and emotional development of the child.

Dr. Koblenzer illustrated cases of infantile eczema in which aggressive dermatologic measures were combined with a psychological approach, and that this helped the parents to recognize and deal with their conflict.

NEXT: Stress and skin disease

Psychiatric factors often are instrumental in the etiology and course of skin conditions, according to a study by Mohammad Jafferany, M.D., a dermatologist and psychiatrist and adjunct assistant professor in psychiatry and behavioral sciences at Central Michigan University, Saginaw, Mich.

"The skin disease is not caused by stress but appears to be precipitated or exacerbated by stress. The proportion of patients reporting emotional triggers varies with the disease, ranging from approximately 50% (acne) to greater than 90% (rosacea, alopecia areata, neurotic excoriations, and lichen simplex) and may be 100% for patients with hyperhidrosis. Stress management, relaxation techniques, benzodiazepines, and selective serotonin reuptake inhibitors (SSRIs) have been found useful in these disorders,” according to the study published in 2007 in the Primary Care Companion in the Journal of Clinical Psychiatry.

READ: Keys to injectable success includes when to say ‘No’

Francisco Tausk, M.D., professor of dermatology and psychiatry, department of dermatology University of Rochester, Rochester, NY, and former APMNA president, said studies have suggested that about one third of patients who come to dermatology clinics have significant emotional problems associated with their skin conditions.

"The problem is that, as dermatologists, we don’t address that issue. Some of the problems stem from the fact that diseases like psoriasis or eczema are very visible and therefore significantly impact your sense of being, social interactions, intimacy, etc. That's one aspect of these diseases - that psychological problems stem from skin disease," Dr. Tausk says.

"The other side of the coin is represented by skin diseases that are the product of psychiatric illness; the most common example is skin picking."

There are degrees of skin picking, according to Dr. Tausk, spanning normal to psychotic behavior. A teenager picking acne lesions might be regarded as normal. But patients who deform their appearance by skin picking and develop significant hyperpigmentation and scarring are not behaving normally.

People with impulse control disorder who pick their skin know they’re doing it but can’t stop, he says.

“These patients may spend up to six hours a day in front of the mirror using their fingers or a number of instruments such as tweezers,” Dr. Tausk says.

At the far end of the spectrum are patients that have no awareness that they’re picking their skin.

"They deny this emphatically. They come with numerous ulcerations on their skin, sometimes extending to most of the body surface, Dr. Tausk says.

“Then, there are patients that suffer from delusions, and have the conviction that they have parasites coming out of their skin (called delusions of parasitosis). In many of these cases, cutaneous treatments don’t help enough or at all. Therapies vary considerably depending on the level of insight into the self-harming behavior.

"If the patient has conscience that they’re producing their own disease, then it’s much easier to treat, usually with the addition of cognitive behavioral or psychotherapy. If patients adamantly deny their role in the self-injurious behavior - they say they wake up in the morning and there’s a hole in their face - then they need antipsychotics,” Dr. Tausk says.

NEXT: Are dermatologists prepared? 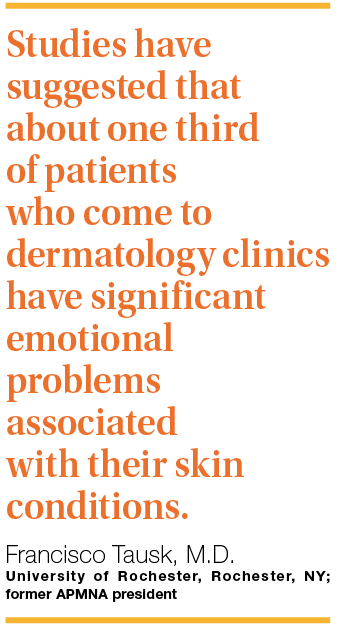 In a study Dr. Jafferany and colleagues published in July 2010 in the International Journal of Dermatology, researchers assessed the level of training in, and awareness and attitude about, psychocutaneous disorders among dermatologists.

READ: The importance of patient loyalty

A mail-in survey was sent to all members of Washington State Dermatology Society. They were asked to provide information on demographic variables; level of training, skills, and degree of comfort in managing psychodermatologic disorders; referral patterns, knowledge of patient and family resources on psychodermatology; and interest in continuing medical education on psychocutaneous disorders, according to the study’s abstract.

One hundred and two dermatologists responded. Of those, 18% reported a clear understanding of psychodermatology and 42% of the respondents reported being very comfortable in diagnosing and treating psychocutaneous disorders. About 90% of those responding were not aware of any patient or family resources on psychodermatology. Nearly 40% expressed interest in attending any kind of continuing medical education activity on psychodermatologic disorders, according to the study.

Dr. Koblenzer’s nearly 50 years in practice have focused on caring for patients with a psychological aspect to their skin disorder. In the United States, Dr. Koblenzer is a rare breed. The former APMNA president says that the American health system leaves little room for talking with patients about their psychological health.

Exploring possible psychological ties to skin disease in patient care, research and education have not taken hold in the United States. There is the APMNA, but growing its membership and getting dermatologists and others to attend meetings has been a challenge, she says.

READ: How to get selected for clinical research

"This is something that I think is inefficient in our system.The Europeans have really taken [psychodermatology] seriously. When the British formed a society similar to the APMNA, within one year, they had 100 members. The APMNA, after more than 10 years, still has only about 15 or 20 members. There is a very different attitude in this country.

"The Scandinavians have been very active and many of the European countries have produced real research. I would have to say that up until now we have not. Anything that I have written, and I have published 80-some papers, have all been really observational rather than strictly scientific,” Dr. Koblenzer says.

It was the day before the American Academy of Dermatology meeting, and at the same location of the meeting.

"Finally, I canceled it. … only three people signed up,” he says. “This disinterest in the topic is not the same in other countries. For example, we organized a symposium on psychodermatology the day before the World Congress in 2008 in Buenos Aires, and we had more than 200 people there."

"Some dermatologists are trying to treat these patients, but, obviously, you have to have training or knowledge or be able to recognize psychiatric complements in these patients. Cream, ointments and dermatologic medications do not help these people,” Dr. Jafferany says.

One way to learn more, according to Dr. Jafferany, is through the APMNA. Launched in 1989, the APMNA holds its annual meeting the day before and at the location of the American Academy of Dermatology each year.

APMNA’s objectives are to promote the awareness of psychocutaneous medicine; hold meetings, seminars and symposia on psychodermatology; facilitate the introduction of psychodermatology curriculum into dermatology and psychiatry residency programs; and provide support to patients and parents on psycho-dermatological disorders.

Interested dermatologists can attend meetings (held every other year) in Europe by the European Society of Dermatology and Psychiatry. Making Psyche part of practice Dermatologists’ awareness that dermatology and psychiatry are interwoven is an important first step, according to these experts.

READ: Biologic use beyond psoriasis

Other steps are for dermatologists to learn more about how to manage and when to refer these patients by attending meetings and reading journal articles. A greater awareness about psycho-dermatology and acceptance in the specialty could lead to more widespread learning in residencies.