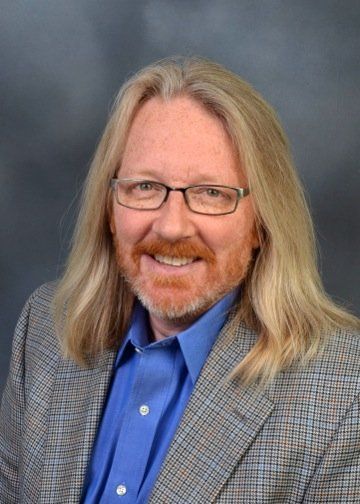 Mark Saltzman, Ph.D., Yale professor of biomedical engineeringYale researchers have developed a sunscreen, made with bioadhesive nanoparticles, that doesn’t penetrate skin. They report in a new study that by encapsulating padimate O, the sunscreen enhances UV protection, while preventing epidermal cellular exposure to chemical UV filters and the health concerns associated with their direct cellular exposure.

The bioadhesive nanoparticles, according to the study’s abstract, are “readily suspended in water, facilitate adherence to the stratum corneum without subsequent intra-epidermal or follicular penetration, and their interaction with skin is water resistant, yet the particles can be removed via active towel drying.”

Most commercial chemical sunblocks, according to a Yale press release on the study, can penetrate the skin and go into the bloodstream, possibly causing hormonal side effects and promoting skin cancer.

"Almost all of the organic sunblock molecules are not chemicals we want penetrating into the skin, or into the bloodstream. Many of these are aromatic compounds that can very effectively absorb UV energy, but concerns have been raised regarding their potential to act as allergens, to release oxidative species after UV exposure and to partially bind to hormone receptors,” study coauthor Michael Girardi, M.D., professor of dermatology at Yale Medical School told Dermatology Times. “The advantages of using chemical sunblock to protect against UV damage nonetheless outweigh the risks. Our goal with the nanoparticle formulation strategy is simply to further increase the benefit-to-risk ratio."

The study’s authors found that when they applied the sunblock to the skin, it didn’t come off or penetrate into the skin, according to senior author, Mark Saltzman, Ph.D., Yale professor of biomedical engineering. 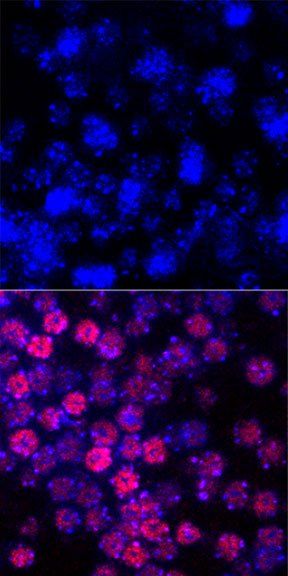 Cyclobutane pyrimidine dimer staining of mouse dorsal epidermal sheets after receiving different topical interventions and UVB irradiation (160 J m?2 ). Shown here with no protection (on top/red) versus using sunblock based on bioadhesive nano particles (on bottom/blue).“Nanoparticles are large enough to keep from going through the skin’s surface, and our nanoparticles are so adhesive that they don’t even go into hair follicles, which are relatively open,” Dr. Saltzman said.

The researchers used mouse models to show their sunblock protects the skin as well as commercial sunscreens, despite using significantly less active ingredient. They also studied the chemical change that occurs when sunscreens’ active ingredients absorb
UV light, called reactive oxygen species, suggesting that if these agents penetrate the skin, the resulting chemical change could cause cellular damage and potentially facilitate skin cancer, according to the release.

The Yale-developed sunscreen sticks to the skin’s outer layer by using a nanoparticle with a surface coating in aldehyde groups. The nanoparticle’s hydrophilic layer locks in padimate O. While sunblocks with larger particles of inorganic compounds, such as titanium dioxide or zinc oxide, don’t penetrate the skin, they’re cosmetically unacceptable to many because they’re opaque. The Yale team’s sunscreen is transparent.

Further development of the technology with other chemical sunblock agents and with physical blockers, including testing on human subjects, is necessary before the safety and efficacy of the nanoparticle formulation is confirmed, according to Dr. Girardi.

Arthur W. Perry, M.D., a plastic surgeon with offices in New York and New Jersey, and adjunct associate professor of plastic surgery at Columbia University, agrees that sunscreens could pose a health threat.

“There are 17 FDA approved sunscreen agents. Fifteen are ‘chemical’ agents and two (zinc oxide and titanium dioxide) are ‘physical’ sunscreens. Chemical sunscreens are absorbed through the skin in ounce amounts and are detectable in the blood and urine for up to 48 hours following application. Nine are considered endocrine disruptors, and the public is increasingly aware of this problem. The hormones most commonly disturbed are estrogen, progesterone, testosterone and thyroid,” Dr. Perry said to Dermatology Times.

“Endocrine disruptors can cause abnormal development of fetuses and growing children. They cause early puberty and premature breast development in girls, and small and undescended testicles in boys. They cause low sperm counts and infertility. Endocrine disruptors that act like estrogen can contribute to the development of breast and ovarian cancers in women, and other sunscreens may increase the chance of prostate cancer in men.”

While Yale’s novel approach will improve the pharmacologic properties of padimate O, allowing for aesthetically superior UVB blockage without skin absorption, the advance will do little to improve the safety profile of typical sunscreens, according to Dr. Perry.

“Padimate O blocks UVB in the range of 290-320 nm and would therefore require combinations with other agents to cover a broader spectrum,” he said. “Zinc oxide blocks both UVB and UVA in the range of 290 - 385 nm and can be used as a sole agent. If this same technology is applied to other chemical sunscreens, this narrow range problem may be overcome.”

New York City dermatologist Darrell S. Rigel, M.D., clinical professor of dermatology and New York University Medical Center, said that while preliminary findings on this new sunscreen are interesting, the notion that commercial sunscreens pose a real threat is unsubstantiated by research. And the nanotechnology on which the Yale team’s sunscreen is based is controversial.

“I would say the controversy about nanoparticles being good or bad is still up in the air. Even the FDA recognizes that in their monograph about sunscreen because they’re looking for more data on nanoparticles,” Dr. Rigel said. “The other thing is there certainly are actives in sunscreen that do get absorbed and there have been some hypotheses that these can be problematic; however, there has been no study that definitively demonstrates any direct harm. There are so many misconceptions about sunscreen.”

In addition, according to Dr. Rigel, prospective studies show that people who regularly wear sunscreen lower their risks of getting melanoma and non-melanoma skin cancer.

“The question is what happens when people absorb the ingredients into their skin?” Dr. Rigel said. “Nobody knows. Do some of the sunscreen chemicals get absorbed in the urine and secreted in the urine? Absolutely, including Padimate O. Is it bad? We haven’t found anything bad. None of these hypothetical things are panning out even when millions of persons use these products every day while exposed to sun.”