Leaky gut, leaky skin, or both?

In our first Irregular Borders column, Peter A. Lio, M.D., explores the evidence for leaky gut and its relevance in dermatology while highlighting parallels with impaired skin barrier function in conditions such as atopic dermatitis. 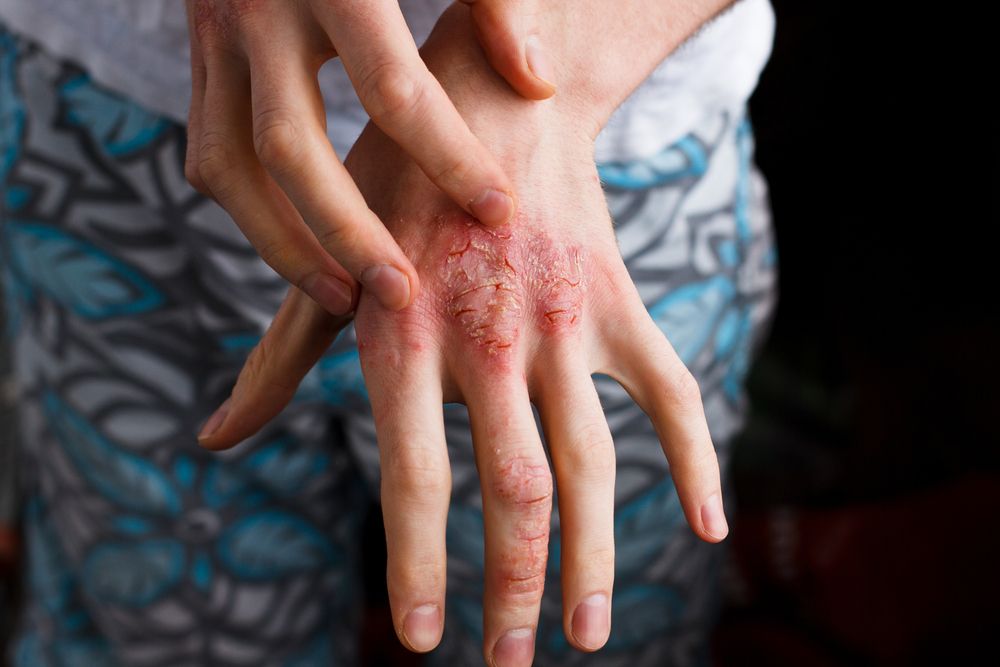 Peter A. Lio, M.D. explores the evidence for leaky gut and its relevance in dermatology, while highlighting parallels with impaired skin barrier function in conditions such as atopic dermatitis. (&copy;TernavskaiaOlgaAlibec/Shutterstock.com)

The central importance of the skin barrier has become clear for a number of diseases including acne, psoriasis, ichthyosis, and atopic dermatitis (AD)1. Excitingly, the filaggrin story in AD has codified the idea that loss-of-function mutations in the FLG gene (which codes for the protein filaggrin that aggregates keratin filaments and plays an integral role in skin barrier function) is central to the pathophysiology of AD, helping paint a mechanistic picture2.

Provocatively, such deficient skin barrier function has been shown in murine models to lead to higher penetration of allergens through the skin and to enhanced sensitization to allergens, suggesting that a similar process could occur for humans with AD3,4. It is postulated that such epicutaneous sensitization to both food and environmental allergens may in part explain the correlation between AD, food allergy, allergic rhinitis, and asthma that defines the so-called “atopic march”5. Perhaps even more convincing, recent research suggests that AD could even be prevented simply by fortifying the skin barrier with moisturizers in high-risk individuals, further emphasizing its primacy in the pathogenesis of AD 6,7.

Our epithelium, however, is not limited to the skin. The intestinal epithelium plays a role similar to that of the cutaneous one, maintaining a barrier from the outside world and selectively separating luminal contents from the interstitium. Impairment of this function leads to increased intestinal permeability, often referred to as “leaky gut”8. It is not much of a stretch to imagine that there could be similar consequences to those of impaired skin barrier function, and indeed, leaky gut is often touted as the primary underlying problem for a number of chronic illnesses by holistic practitioners9. That does not mean it is without controversy, however. In this brief review, we will explore some of the evidence for leaky gut and its relevance in dermatology, with an eye towards finding parallels with impaired skin barrier function, which I have dubbed “leaky skin.”

While similar to the skin in many ways, the gut must also absorb nutrients and is specialized for this task. There are three major components of the human intestine: luminal microbiota with an outer mucus layer, an inner mucus layer, and an epithelial layer. The luminal microbiome within the gut consists of an enormous community of bacteria that plays a critical role in digestion, the production of hormones and vitamins, inhibiting growth of pathogens, and in assisting with drug and toxin metabolism 10,11,12. Enterocytes prevent contents in the lumen from crossing into the blood with tight intercellular junctions, allowing for only specific nutrients to pass while blocking others10. The deep part of the gut barrier is populated by a network of immune cells, organized in a specialized structure called “gut associated lymphoid tissue” or GALT. The GALT is a major lymphoid organ, containing up to 70% of the body’s immune cells and plays an important role in immune tolerance 10.

As with the skin barrier, impairment of the gut barrier may occur resulting in increased intestinal permeability. Inflammation, stressors, and dysbiosis are all associated with disruption of the gut barrier, and such dysfunction has been associated with a number of diseases including inflammatory bowel disease, celiac disease, small intestinal bacterial overgrowth, cirrhosis of the liver, fibromyalgia, Parkinson’s disease, and particularly relevant for this discussion, atopic dermatitis 13,14,15,16, 17,18.  Although not fully elucidated, the thinking is that abnormal gut barrier function allows the passage of antigens from the intestine, stimulating the immune system to produce an inflammatory response in predisposed individuals19.

While skin barrier function can be quantified with measurements such as transepidermal water loss (TEWL), the intestinal barrier is often measured by administering a mixture of sugars orally-usually lactulose along with either mannitol or rhamnose-and then examining the urinary excretion of the sugars. The larger molecules (lactulose) are able to permeate the barrier only when there is significant gut barrier dysfunction, while the smaller molecules (mannitol or rhamnose) are absorbed transcellularly, independent of the barrier function, allowing one to calculate a large sugar/small sugar ratio, which is elevated in proportion to gut barrier dysfunction20.

We have thus far built up a compelling narrative, but what is the actual evidence, especially as it pertains to dermatologic conditions? Remarkably, Pike et al were able to demonstrate a significantly increased lactulose to rhamnose excretion ratio in children with AD when com- pared to controls 21, while Rosenfeldt et al took it a step further and were able to show statistically significant positive association between the lactulose to mannitol ratio and the severity of the eczema. Moreover, the same paper explores treating the dysfunction with a probiotic and reports a statistically significant improvement in the ratio in the treatment group compared to placebo (0.073 vs. 0.110, P=.001) 22.

Similarly, the closely related allergic condition eosinophilic esophagitis (EoE) seems to follow AD, with a recent paper reporting that patients with active EoE had significantly higher lactulose:mannitol ratios when compared to controls (0.045 vs. 0.033, p<0.001), but no significant difference between the group with EoE in remission compared to healthy controls, fitting nicely with what would be anticipated 23. And, if we extend our net, there are several lines of evidence which converge on the idea that the increased intestinal permeability appears to be correlated with acne as well 24.

Which leads us to the more difficult part of this discussion: what to do? Unlike the preeminent availability of the skin, the gut is a little harder to access directly. It stands to reason then, that our most readily available intervention could be diet: a somewhat contentious area in dermatology.

Many patients are quick to implicate foods as triggers for AD 25, but the evidence is less definitive. One small study evaluated 15 children with AD placed on a strict elimination diet. Notably, in two weeks 9 of 15 had a significant reduction in intestinal permeability. Remarkably, this correlated with improvement in clinical eczema scores as well, with responders showing better gut improvement than non-responders 26. While thought-provoking, the aggregate data on dietary exclusions do not follow this pattern-at least in terms of skin improvement. An excellent review by Bath-Hextall et al. in 2009 summarized the literature as follows:

Clearly, further work needs to be done in this area, with emphasis on measuring intestinal permeability as well as AD severity; perhaps there is a small subgroup for which this is an important connection and that faint signal is washed away in larger, mixed groups.

We have also discussed the gut microbiome as playing an important role in the barrier function. It follows that alterations in gut microbacterial diversity may alter the immune system, and indeed, evidence exists that such perturbations can inhibit the maturation of T-regulatory cells, leading to increased inflammation 28,29. Clinically, this is borne out in several studies such as a double-blind placebo controlled crossover study (also discussed above) in which two different strains of lactobacilli probiotic were administered to 41 children with moderate to severe AD for six weeks. Fourteen of the patients had lactulose-mannitol excretion tests to assess intestinal permeability. Median lactulose excretion decreased by 50% following treatment with with the lactobacillus probiotics, suggesting a significant improvement in gut barrier 30. Despite these encouraging results, the consensus currently states that probiotics are probably not effective for the treatment of established AD 31. However, there is the suggestion that as with exclusionary diets, there may be different phenotypes of the disease which respond more favorably than others. Further, there remain many unanswered questions around probiotics: the appropriate strain, dose, and duration of probiotics to name a few; but there is certainly promise in the concept of probiotic therapy.

There is one other fascinating possibility that I have come across: In order to fortify the skin barrier we apply moisturizer, but what if there were a “moisturizer” for the gut? As improbable as that sounds, gelatin tannate is one such candidate for this role. It is thought to form bonds with mucin within the mucus layers to strengthen the gut barrier10. In addition to this physical activity, it also appears to act as an astringent, enhancing the elimination of inflammatory proteins 32. This-or perhaps another compound like it-may prove to be an option for treating impaired gut barrier in the future. And, should this reasoning be sound, such improvements to the “internal” epithelium may well lead to improvements on the external epithelium.

Importantly, however, we will only know if this is happening if we bother to look. I maintain that it is this willingness to consider even the silliest-sounding ideas and to evaluate them truly and with an open mind that make our conventional, evidence-based approach to medicine the best approach. Indeed, it seems that too many breakthroughs and brilliant ideas to ignore have come from such improbable beginnings.