A new study advises selecting biologic therapies for psoriasis based on individual factors such as patients' comorbidities, preferences and clinical situation, as well as the advantages and disadvantages of particular biologic treatments.

A new study advises selecting biologic therapies for psoriasis based on individual factors such as patients' comorbidities, preferences and clinical situation, as well as the advantages and disadvantages of particular biologic treatments. The study appeared in the February 2018 issue of the American Journal of Clinical Dermatology.

Authors led by Jashin J. Wu, M.D., reviewed available evidence to formulate expert-opinion algorithms for comorbidities such as psoriatic arthritis (PsA), tuberculosis and hepatitis B, as well as psoriasis in children and women of childbearing potential.

Few patients present with psoriasis and no other health issues, said Dr. Wu, of Kaiser Permanente Los Angeles Medical Center, Los Angeles. Probably the most common comorbidity dermatologists see, he said, is PsA, which afflicts around one-third of patients with psoriasis. In such cases, Wu et al. recommend the TNF inhibitors adalimumab, etanercept and infliximab, in that order, as first-line options, as all have been shown to inhibit radiographic progression of PsA, as well as other disease signs and symptoms. Overall, they write, "The efficacy of TNF inhibitors for PsA is comparable. However, infliximab is more effective at clearing skin lesions, followed by adalimumab and then etanercept."

Approximately one-fourth of patients with psoriasis are females of childbearing potential, said Dr. Wu. For pregnant or nursing women, authors' recommendations – based on limited data – are as follows:

1. Certolizumab – Though not yet approved for psoriasis in the United States, studies have shown minimal to no fetal transfer of this drug through the placenta or via nursing.
2. Ustekinumab – With evidence limited to case reports, authors found ustekinumab to be relatively safe, with no clear reported safety signals in pregnant women.
3. Adalimumab, etanercept, infliximab (in that order)
4. IL-17 inhibitors

Regarding pediatric psoriasis, said Dr. Wu, "Usually psoriasis presents in the late teens or early 20s. If it does present in childhood, it's usually mild, and patients do not need systemic therapies." For those rare patients who do, study authors' algorithm is as follows:

Latent tuberculosis infection (LTBI) is particularly common in immigrant populations, added Dr. Wu. He and colleagues recommend ustekinumab first-line for patients with psoriasis and LTBI. "No cases of LTBI reactivation were reported across five phase three ustekinumab psoriasis trials in which patients with LTBI received isoniazid prophylaxis," they write. They recommend IL-17 inhibitors second. As multiple cases of serious TB infections have been associated with TNF inhibitor use for chronic inflammatory conditions, they consider TNF inhibitors third-line. Wu et al. also note that physicians must determine patients' LTBI status and provide anti-TB prophylaxis for positive patients for at least 1-2 months before initiating any biologic therapy.

"Hepatitis B is more common in the Asian population," said Dr. Wu. Therefore, he said, dermatologists who serve a high proportion of Asian patients should find the study's recommendations – ustekinumab, IL-17 inhibitors and TNF inhibitors, in that order – helpful.

For patients with psoriasis and inflammatory bowel disease, Wu et al. recommend adalimumab, infliximab and ustekinumab first-line, in that order.

Authors' recommendations for patients with psoriasis and multiple sclerosis (MS) or congestive heart failure (CHF) are fairly similar. In both situations, they recommend ustekinumab first-line and the IL-17 inhibitors as a class for second-line treatment.

The study's main limitation is that it did not include the IL-12/23 inhibitors guselkumab and tildrakizumab, Dr. Wu said. At the time authors researched and wrote their recommendations, he explained, there was too little data regarding guselkumab, which was FDA-approved in July 2017, and tildrakizumab was not yet approved. To remedy these shortcomings, study authors are already planning to update their algorithms in one to two years to incorporate these and any other biologics that gain approval for psoriasis within that timeframe.

DISCLOSURES
Dr. Wu is an investigator for AbbVie, Amgen, Eli Lilly, Janssen, Novartis and Regeneron. No sources of funding were received for the preparation of the article discussed herein. 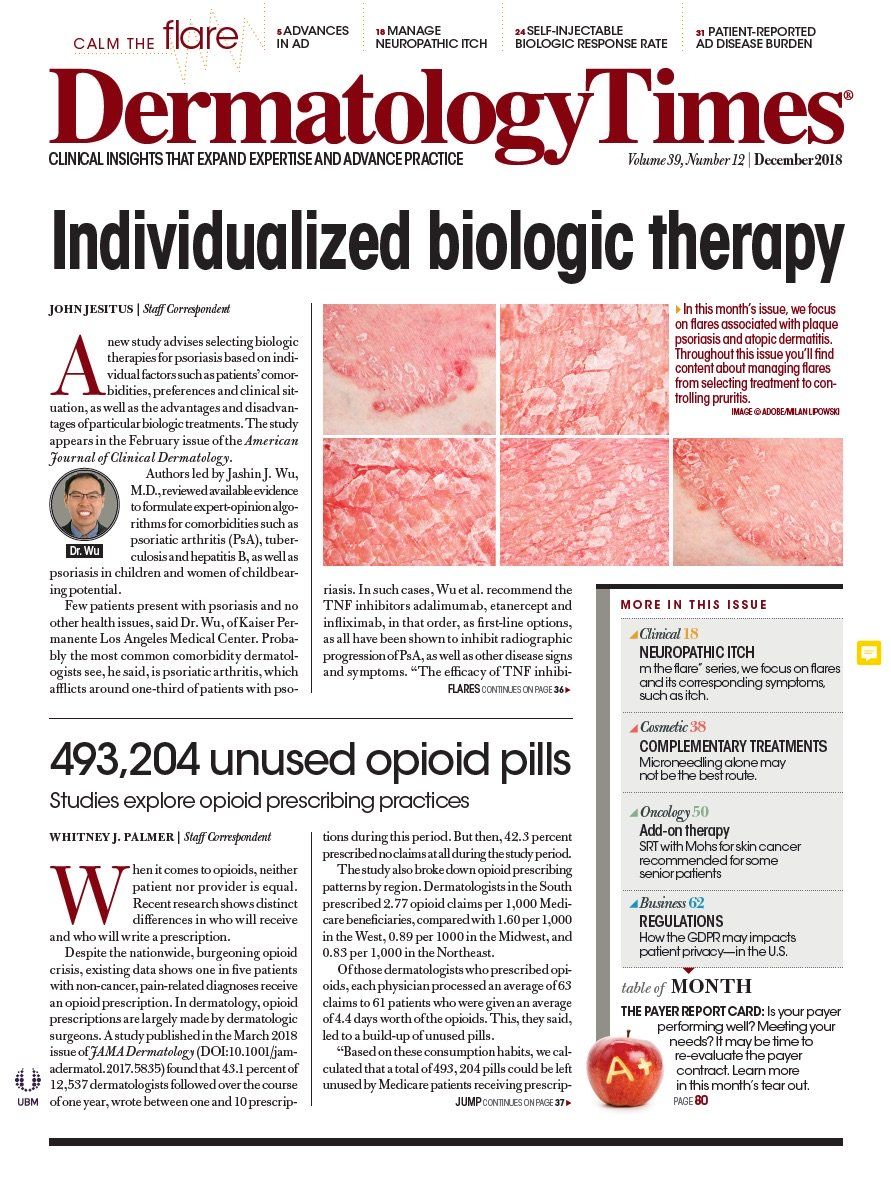