Terence J. Ryan, D.M., F.R.C.P., and his wife, Anne, chose their honeymoon destinations in an unusual way. They wanted to visit places affected by leprosy.

Terence J. Ryan, D.M., F.R.C.P., and his wife, Anne, chose their honeymoon destinations in an unusual way. They wanted to visit places affected by leprosy. 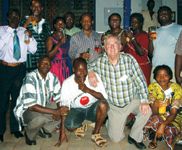 That journey marked not only Dr. Ryan's foray into marriage, but also the first time the British dermatologist had traveled outside of Europe. But it was not the last. Since then, Dr. Ryan - who in 1997 retired after 20 years as head of Oxford University's dermatology department - has become one of the world's leading experts on leprosy, as well as on the blood supply and lymphatic drainage of the skin.

"I always wanted to be a doctor. When I was 4 years old, I made medicines for the horses," Dr Ryan says about his childhood in Nottingham in central England. But World War II made it difficult for him to study sciences, and he attended 16 different schools before ending up at Oxford.

"I was labeled educationally subnormal at one point," he notes.

And his interest in dermatology?

"It was really the fear of the dermatology professor at Oxford. She was a famous Irish woman, known to be pretty fierce with students - she'd hit them. And since she knew my father, I really learnt my dermatology well," he says.

After receiving his medical degree at Oxford in 1957, Dr. Ryan did a two-year stint in the army, practicing both dermatology and ENT surgery.

"It's a very odd combination," he says. "But I learned that by temperament, I wasn't really a surgeon. So, I stuck with the skin."

Before returning to Oxford in 1971 to establish a research profile for the dermatology department, Dr. Ryan built a stellar reputation in the field of blood supply to the skin.

"Dermatologists were ignorant about blood supply in the 1950-1970 period, so almost every textbook in the USA or the UK tended to have me cover this topic," he says. "Essentially, I listened to the blood supply people, joined their societies and told dermatologists all about what I learned."

It was also during the 1960s that Dr. Ryan became interested in quality-of-life issues for patients.

"Everyone was talking about heart failure, but I was one of the first to talk about skin failure and the handicap of having a disease like leprosy or psoriasis."

Dr. Ryan practiced what he preached: He was the founding adviser to Britain's Psoriasis Association in 1968, and helped with the origins of the Eczema Society.

"Working with patient groups was definitely pioneering work," he says. "Ridiculous ideas prevailed at that point, such as that these groups encouraged persons with disease to marry, or they might become an anti-doctor lobby."