Ongoing research is trying to identify strategies for overcoming resistance of advanced basal cell carcinoma to targeted therapy with a Hedgehog inhibitor. High level evidence to support adjuvant radiotherapy for high-risk non-melanoma skin cancers is lacking, but certain patients warrant evaluation by a multidisciplinary tumor board and treatment with adjuvant radiotherapy based on their risk for recurrence.

Most patients with non-melanoma skin cancer (NMSC) can be successfully treated with surgery alone, but not all. In an educational session at the 2015 annual meeting of the American Society of Clinical Oncology, speakers addressed management for some of the more challenging NMSC cases represented by patients with advanced basal cell carcinoma (BCC) and patients at high risk for recurrence.

BCC accounts for at least three-fourths of cases of NMSC, and the determination that it is primarily driven by a hyperactive Hedgehog (Hh) signaling pathway was a landmark discovery as it opened the door to targeted therapy, said Jean Y. Tang, M.D., Ph.D., associate professor of dermatology, Stanford University School of Medicine, Stanford, CA.

In 2012, the FDA approved vismodegib (Erivedge, Genentech/Roche) as the first targeted treatment for advanced BCC (metastatic or non-operable).

However, once vismodegib was adopted in clinical practice and as more patients were treated for longer periods of time, it was realized that about 20% of patients per year would develop resistance to the Hh inhibitor.

Now, findings from research undertaken by Dr. Tang and colleagues at Stanford University suggest strategies for overcoming the resistance.

NEXT: Interventions for vismodegib drug resistance

“Advanced and metastatic BCC is quite rare, but vismodegib represented an important advance for these challenging cases and provided significant clinical benefit. As happens with most targeted oncologic therapies, however, some BCCs developed resistance over time,” Dr. Tang says.

Using genomic sequencing methods to analyze samples from biopsies of resistant tumors, Dr. Tang and colleagues were able to determine that about half of the cases could be explained by reactivation of the Hh pathway secondary to mutations in Smoothened (SMO).

In an unbiased approach to screening led by Philip A. Beachy, Ph.D., professor of biochemistry, Stanford University, about 2,000 currently available drugs were evaluated for their potential to overcome resistance to vismodegib. Through that work, itraconazole and arsenic trioxide (Trisenox, Cephalon) were identified as lead candidates.

Like vismodegib, itraconazole inhibits SMO, but it binds to SMO at a different site than vismodegib. Arsenic trioxide, which is used for the treatment of acute promyelocytic leukemia, acts downstream of SMO in the Hh signaling pathway by binding the GLI transcription factor, she explains.

So far, a phase 2 clinical trial has been completed investigating oral itraconazole in patients with BCC. The results were encouraging as they showed significant reduction in cell proliferation, Hh pathway activity, and tumor area.

Arsenic trioxide was evaluated in 5 patients using an intravenous regimen with treatment given on 5 consecutive days out of every 28 days. Disease stabilization was achieved in treated patients, but there was no significant shrinkage of tumor area with intermittent dosing.

“Next we will be evaluating daily oral administration of arsenic trioxide based on the hypothesis that it may be more effective with continuous dosing,” Dr. Tang says.

Research is also ongoing to try to identify the underlying mechanisms that would explain the other 50% of cases of vismodegib resistance and other strategies for overcoming resistance.

NEXT: Potential in combination therapies

Evidence from studies using a mouse model of medulloblastoma, another tumor driven by the Hh signaling pathway, suggest a role for combination treatment with itraconazole and arsenic trioxide or using agents that inhibit both SMO and PI3 kinase, Dr. Tang says.

To enable the research, Dr. Tang would like to obtain tumor samples taken before and after treatment initiation with vismodegib. She asks that physicians contact her for more information about processing and sending the biopsy specimens.

Of the approximately 3.5 million new cases of non-melanoma skin cancer (NMSC) diagnosed each year in the United States, about 5% are considered high risk for local, regional, or distant recurrence.

High level evidence from prospectively collected data on the potential benefits of adjuvant radiotherapy in the postsurgical management of these tumors is lacking. Nevertheless, based on retrospective series, there appears to be universal support for its use in patients with specific clinicopathologic features, said Sandro V. Porceddu, M.D., associate professor, The University of Queensland Australia, and senior radiation oncologist, Princess Alexandra Hospital, Brisbane.

“Due to the dearth of high-level evidence, there are no universally adopted guidelines on adjuvant radiotherapy in patients at high risk for relapse after surgical management of NMSC. However, this issue is addressed in the National Comprehensive Cancer Network (NCCN) guidelines based mainly on Level 2a evidence derived from findings of retrospective series,” he explains.

“There are four main groups of patients who warrant evaluation by a multidisciplinary tumor board and treatment with adjuvant radiotherapy based on their risk for recurrence-patients who are immunosuppressed and those with locally advanced primary disease (stage T3-T4), regional nodal metastasis, or clinical perineural invasion.”

Focusing on patients with head and neck NMSC, Dr. Porceddu adds that referral to a multidisciplinary tumor board is also recommended in other situations due to case complexity. They include patients whose tumor creates cosmetic or functional concerns due to its location (eg, lip or eyes), those with multiple primary lesions or distant metastases, and if there is difficulty obtaining clear margins without causing major morbidity such as orbital exentoration.

NEXT: Candidates for adjuvant radiotherapy

Discussing candidates for adjuvant radiotherapy, Dr. Porceddu notes that various retrospective series show that its benefit for improving locoregional control and disease-specific survival in patients with locally advanced disease, such that their outcomes are improved by about 10% to 20% relative to patients treated with surgery alone.

Regarding adjuvant radiation for patients with perineural invasion, the recommendation applies only to those with clinical findings of large nerve involvement and does not include patients in whom perineural invasion is found incidentally at surgery.

“Clinical perineural invasion in patients with head and neck SCC usually involves the second branch of the trigeminal nerve. Now, there are several good reports demonstrating that the addition of postoperative radiotherapy should be considered standard of care for these individuals,” Dr. Porceddu says. 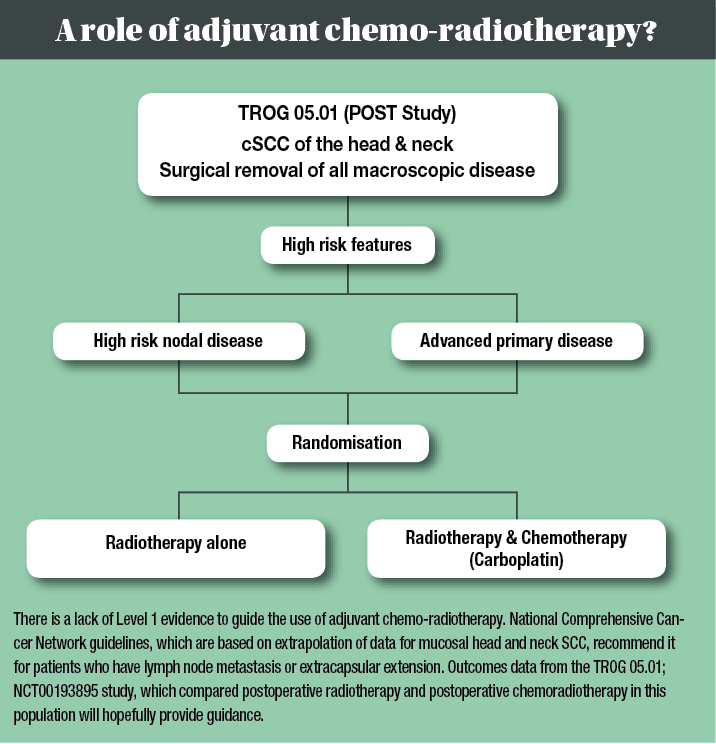 For patients with regional nodal metastasis, the most common sites of involvement are the intra-parotid nodes followed by the cervical nodes. The relapse rate for this population varies widely, from 20% to 80%, and depends on the extent of nodal disease (involved node size and number) as well as various pathological features. Findings predicting an increased risk for relapse include extracapsular extension, positive/close margins, dermal or in-transit metastases, and invasion into surrounding structure, as well as recurrence after primary surgery and immunosuppression.

“Addition of radiotherapy to surgery in patients with regional nodal metastasis was reported in one study to improve the 5-year disease free survival rate from 54% to 73%,” Dr. Porceddu says.

Patients who are immunosuppressed, either because of disease (eg. chronic lymphocytic leukemia) or medication use are not only at increased risk for developing NMSC compared to their immunocompetent counterparts, but they are also more likely to have high risk features, such as perineural invasion, as well as higher risks of locoregional recurrence and mortality.

“For these reasons, adjuvant radiotherapy should be considered for any immunosuppressed patient with a primary NMSC larger than 2 cm,” Dr. Porceddu said.

Dr. Porceddu also discussed postoperative chemoradiotherapy for cutaneous NMSC of the head and neck. As for adjuvant chemotherapy, there is also a lack of Level 1 evidence to guide its use. According to the NCCN guidelines, it is recommended for patients who have lymph node metastasis or extracapsular extension.

READ: Screening labs, complacency, and the ABCDEs of pediatric melanoma

“The NCCN recommendation is based on extrapolation of data for mucosal head and neck SCC. However, we hope to have an answer to whether chemoradiotherapy has a role in high risk cutaneous SCC soon as the Trans Tasman Radiation Oncology Group has completed a randomized trial comparing postoperative radiotherapy and postoperative chemoradiotherapy in this population (TROG 05.01; NCT00193895),” Dr. Porceddu says. (See figure) “Accrual of the more than 320 patients targeted for enrollment is complete, and follow-up is ongoing. Outcomes data are expected toto be released in the first quarter of 2016.”

Dr. Tang and Dr. Porceddu have no relevant financial interests to disclose.