Will Kirby, DO, FAOCD, takes an interstellar sidetrip from his Los Angeles-based dermatology practice to the byways of Tatooine for an appearance in Episode VI of this streaming series which airs February 2, 2022 on Disney+.

In this Q&A managing editor, Mary Scoviak, asks Will Kirby, DO, FAOCD, a board-certified dermatologist and chief medical officer of LaserAway, Los Angeles, California, and Dermatology Times® editorial board member, about his experience on working on the set of "Star Wars: The Book of Boba Fett".

For our readers who don't know, what is Star Wars: The Book of Boba Fett?

The Book of Boba Fett is a 7 episode series available exclusively on the streaming service Disney Plus, with new episodes dropping every Wednesday. It picks up about 5-years after the movie Star Wars: Episode VI - Return of The Jedi and follows, as the title suggests, Boba Fett, the most feared bounty hunter in the galaxy.

How did you get your part on the series? Who reached out and was this kind of a life-long dream or just a cool opportunity?

I unfortunately can't specifically explain how I obtained this role but rest assured that this was no accident. An immense amount of effort goes into ending up on Tatooine! This event was more than 40-years in the making for me and to be part of official Star Wars canon is nothing short of intoxicating. Consider this a dream fulfilled!

How would you describe the character you play?

My character is described as a handsome, wealthy, now retired bounty hunter. He spends much of this time, like other galactic bounty hunters, in Mos Espa and in this season he can be found in Twi'Lek Madam GarsaFwip's (played by Jennifer Beals) gambling hall known as Garsa's Sanctuary. 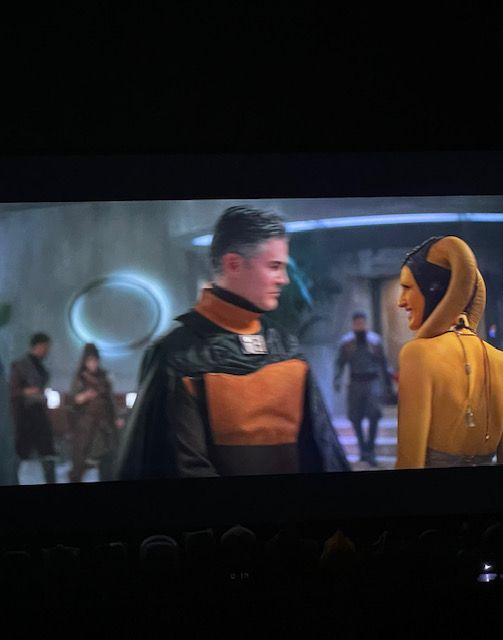 Photo courtsey of Will Kirby, DO, FAOCD

It was nothing short of exhilarating. I wear 4 different outfits, each handcrafted from repurposed Star Wars: Episode II-Attack of The Clones costumes that were being held in storage in England for the past 2-decades. I wear obis, kimonos, capes, and gak all custom fitted to my body habitus and designed for my character. Costume designer Shawna Trpcic and her masterful team should absolutely win multiple awards for their work on this series.

How much were you told about your scenes and the overall plot?

As you might imagine, the set was top secret and virtually no information was given out in advance of filming to ensure complete privacy. The location had the highest security I have ever seen. We speculated some of the general, broad strokes in terms of plot points going in but watching the show now brings it all together!

Debunk some myths about what it's like to be in a film e.g. wait times on set, good/bad catering, diva cast members?

Well, I have been part of some rather low-budget productions in my career so I have now seen both ends of the spectrum. This experience was nothing short of world class. Afterall, it's Disney and Star Wars! We were fed unbelievably well, gourmet meals 4 times a day, and every single person involved with the production,literally everyone, was kind, generous, and professional. Of course, there was some downtime and electronics were barred so we passed the time mostly reading, socializing, and working out. Getting into costume was time consuming, and makeup for some of my fellow cast members took hours out of the day based on the detail of their creature. Truth be told, the days were long, sometimes as long as 18 hours, but the time flew by! And I was the only diva on the set!

Did you get to work with any of the main cast members and, if so, what were they like?

My first day on set I was in a scene with Boba Fett (played by Temuera Morrison), Fennec Shand (played by Ming-Na Wen), and their Gamorrean Guard allies. I couldn't believe it. They were, just like me, so appreciative to be part of such a special project. You could just tell that they were super fans too.

How many takes did some scenes require?

Well, I don't want to spoil anything for those who haven't yet seen the series but, as an example, the 3-minute scene I'm part of in episode 4 took nearly 12 hours to film. But I didn't mind at all as 12 hours is nothing. Afterall, I've been waiting more than 4-decades to be part of an iconic Star Wars scene like that!

You clearly aren't afraid to go outside of a traditional “comfort zone”. What advice do you have for your dermatology colleagues who want to try a new hobby, switch the scope of their existing practice, or make a career change?

Some people talk about doing interesting things, but their fear-based mentality relegates them to never fulfilling their true destiny while others actually commit to greatness and accomplish remarkable things. So as a famous Grand Jedi Master once said, 'Do, or do not. There is no try.'

From winning  Big Brother and winning  The Price is Right  to acting on  The Young and the Restless and doing voiceover work on  Robot Chicken, you have had a fascinating entertainment career.  How has your experience in entertainment influenced your dermatology career?

As noted by one of my favorite authors, K. Anders Ericsson, the way to develop expertise is not just via repetition, it's via purposeful practice with meaningful feedback. So, taking this concept into consideration, yes, having a background in entertainment has afforded me the ability to hone my public speaking, teaching, and presentation skills.

Do you think that you would be open to more work in the entertainment industry in the future?

I absolutely love entertainment, but my professional passion lies in dermatology. In a galaxy not so far away I serve as the chief medical officer for the nation's leader in aesthetic dermatology, LaserAway. We just opened our 81st clinic and are in the midst of a major expansion. We now partner with 18 of the top board-certified dermatologists in the United States and are courting others for new markets. My legacy will be bringing safe and effective minimally-invasive aesthetic dermatology treatments to the masses. Nothing, not even Sev'rance Tann, The Hutt Cartel crime family, can stop this initiative to ensure accessibility to top-level care!