Tough cases of onychomycosis frequently include complicating factors such as psoriasis, onycholysis and non-dermatophyte infections, an expert says.

Rarely does any dermatophyte infection occur without clinical presentation of nail dystrophy, says Avner Shemer, M.D. He is a senior physician and specialist in skin and venereal diseases, dermatologic surgery and dermatomycology at the Chaim Sheba Medical Center, Tel Hashomer, Israel.

Yeasts or non-dermatophyte molds with clinical presentation of onychomycosis could be pathogens provided that no dermatophytes are found in three separate cultures taken two weeks apart, he says.

Around 50 percent of nail problems that present to dermatologists involve purely onychomycosis, he says.

In clinical studies, Dr. Shemer says that despite strict inclusion and exclusion criteria, “You never know if a patient experienced nail trauma 20 years ago.” Enrolling such a patient could distort results.

Somewhat similarly, he says, a patient could have a non-dermatophyte infection that has nothing to do with his or her onycholysis.

“Treating the non-dermatophyte infection will not help the onycholysis,” Dr. Shemer says.

The secondary infection on top of the onycholysis is usually a pathogen (such as a saprophyte) or contaminant. Less common causes of onycholysis include fungus, he says.

Conversely, the combination of onychomycosis and nail trauma occurs particularly commonly in the fifth toenail.

“Antifungal treatment will not necessarily result in a total cure,” Dr. Shemer says.

With such caveats in mind, he offers the following difficult cases:

Case 1: A 54-year-old female patient with a 20-year history of severe psoriasis reported that during the past year, her fingernails and toenails had become heavily dystrophic. Her history also includes hypercholesterolemia, hyperlipidemia and hypertension; she was on simvastatin and amlodipine. 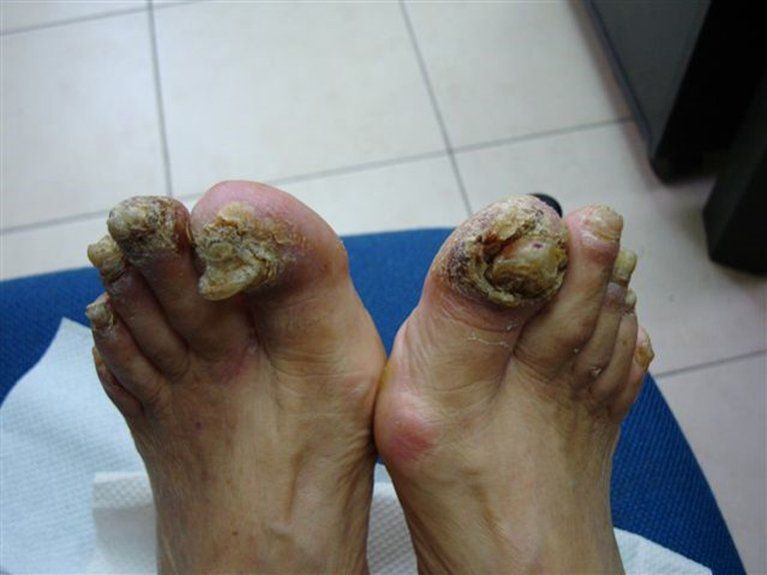 “The patient was treated for skin and nail psoriasis with different topical steroids, with no improvement,” Dr. Shemer says. Four weeks of phototherapy also achieved no response.

“Elevated liver function test was noted; therefore, the treatment was discontinued. Etretinate was not recommended due to her hyperlipidemia,” he says. 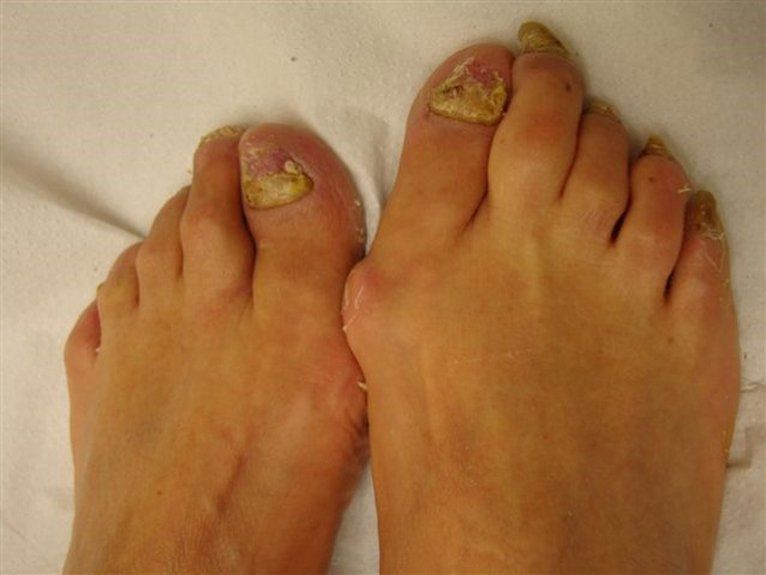 A 54-year-old female patient with a long history of severe psoriasis displays heavy toenail dystrophy. Patient is shown before (top) and after (bottom) one year of treatment with oral terbinafine followed by etanercept. Photos: Avner Shemer, M.D.Due to positive results of QuantiFERON (Quest Diagnostics) and Mantoux testing, the patient went on rifampicin for six months. Two months into this regimen, mycological analysis of her fingernails and toenails revealed Trichophyton rubrum in both areas.

“One culture from the finger was also positive for Aspergillus,” he says.

Three months after beginning treatment with systemic terbinafine, “She had no improvement. Another mycological analysis was taken from her fingernails and toenails. T. rubrum was revealed again, but not Aspergillus,” Dr. Shemer says.

This patient failed to improve on oral terbinafine, he says, because rifampicin accelerates the clearance of terbinafine by 100 percent (Gupta AK, Katz HI, Shear NH. J Am Acad Dermatol. 1999;41(2 Pt 1):237-249). Therefore, the patient continued on terbinafine but discontinued the rifampicin. Ten weeks later, “Moderate improvement was noted in the nails. Then etanercept was started three weeks after discontinuation of terbinafine.” After four months on etanercept, Dr. Shemer says, the patient had substantial, visible improvement of her skin and nails.

Case 2: A 61-year-old male construction worker with a history of hypertension, diabetes and mild stasis dermatitis presented with severe onychomycosis and tinea pedis of all toenails, both of which had lasted 30 years.

“He had no history of nail trauma or prior nail surgery,” Dr. Shemer says.

Direct smear analysis of his right hallux was positive for fungal hyphae, he says.

Mycological analysis of the right hallux proved negative for fungal hyphae. Suspecting a dermatophyte infection, “Another mycological analysis was taken by drilling from the tip and proximal area of the nail plate. Direct smear was positive for hyphae. Culture revealed T. rubrum,” he says.

Dr. Shemer recommended surgical ablation of the afflicted nail, but the patient refused surgery. Instead, he performed chemical ablation using 40 percent urea paste applied once weekly under occlusion. After eight weeks of this treatment, “The nail became opaque white but did not dissolve. In order to increase the penetration of the ureic acid, we drilled the nail above the dermatophyte-infected area.”

After another four sessions of paste application under occlusion, the nail had been fully ablated. The patient then applied topical terbinafine for several months until achieving a complete cure.

Case 3: A 47-year-old farmer presented with a 15-year history of onychomycosis and tinea pedis. “Direct microscopy was positive for fungal hyphae. T. rubrum was revealed in culture.” The patient started systemic terbinafine 250 mg daily for three months, after which he demonstrated mild-to-moderate improvement. Three months after the patient finished the terbinafine regimen, Dr. Shemer prescribed another month of oral terbinafine at the same dose. Ten months after the patient presented, “All the nails were almost cured completely except for the fourth left toenail,” he says.

A second mycological analysis of this nail using standard culture was negative. “We performed direct microscopy using the drilling technique, and it was positive,” Dr. Shemer says.

A dermatopathologist identified Scopulariopsis brevicaulis in the sample. If one suspects a mold infection, Dr. Shemer says, he or she should instruct the dermatopathology lab to use a culture medium without the antiseptic cycloheximide, which prevents mold growth. Another two consecutive mycological analyses, plus polymerase chain reaction (PCR), were performed, confirming the diagnosis (Shemer A, Davidovici B, Grunwald MH, et al. Br J Dermatol. 2009;160(1):37-39).

For this patient, Dr. Shemer prescribed systemic itraconazole - 400 mg daily for one week, followed by three weeks off therapy - for three months. “Six months after cessation of the systemic treatment, the patient had experienced marked improvement,” he says.

“If one suspects a non-dermatophyte mold, it’s very important to instruct the lab to use the correct media,” Dr. Shemer says. “For S. brevicaulis, this case also illustrates the superiority of itraconazole to oral terbinafine.”